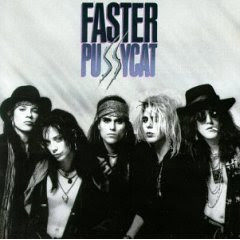 For some reason, I've been hearing this song a lot lately. Caught the video on VH1 Classic, heard it on XM. Heck, it even popped up in a song shuffle on my computer. Before that, it had been years since I'd listened to this song, and I've got to say, regardless of how you feel about the 1980s hair scene, you've got to admit that some pretty good rock 'n' roll party tunes came out of it, and this is one of them.

Shallow? Definitely. There's not enough depth here for a wading pool. Heck, there's not enough depth for a good bath. But it's hard to keep from nodding your head when that driving bass line kicks in, and then comes that familiar wailing guitar lick. Simplistic? Absolutely. But try getting it out of your head once you hear it. And that opening solo just oozes laid back cool.

Besides that, when I was growing up the first three digits of the phone numbers in my town were 281. The person who had 281-7668 had a couple of rough years when this song came out. (It was changed to the generic 555 in a later version of the song.) Ah, the simple pleasures of youth, spoiled by the advent of caller ID... Of course, I never called it myself. I wouldn't have ever done anything like that.

No, it's not a song that's going to change your world (unless your phone number happens to be 281-7668, I guess.) It's not going to make you think about anything or offer any redeeming qualities whatsoever. This song is all about having fun and escaping from everyday concerns, and on that point, I often think perhaps the hair band guys got it right. Isn't that, in a way, what rock 'n' roll is all about? If you're cruising down the highway with the top down on a summer day, just looking to get away and have a little fun, it would be tough to beat this song blaring out of the radio -- even if you feel compelled to turn it down when you stop at a red light so no one hears you listening to it.

Listen to a sample of "Bathroom Wall."