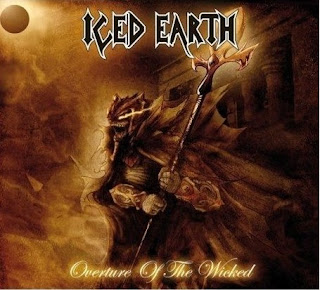 Jon Schaffer offers fans a nice little teaser for Iced Earth’s upcoming album Framing Armageddon coming in the fall. Since 1998’s Something Wicked This Way Comes and Schaffer’s promise to expand on the “Something Wicked Trilogy” fans have been waiting for him to follow through as he delivered a horror-themed record and a very personal historical piece. Finally, fans will get to hear the first installment of what was promised nearly a decade ago.

If this EP is a taste of things to come, I can’t wait. The new song here from Framing Armageddon is “Ten Thousand Strong.” The song, to me, blends the sound of The Glorious Burden with just a little taste of some of the band’s earliest work. It’s got everything Iced Earth fans want, high speed galloping guitar riffs and a catchy as hell chorus.

The remainder of the album is a re-recording of the original trilogy, “Prophecy,” “Birth of the Wicked” and “The Coming Curse.” I had low expectations for this, thinking it would just be a new version of the songs with Tim Owens’ vocals in place of Matt Barlow’s. But the two versions are night and day. Of course, there aren’t any major melodic changes to the songs, but this version is by far heavier, meaner and nastier than the original. The synth ambience on “Birth of the Wicked” was left on the cutting room floor and the piano pieces of “The Coming Curse” are stripped away, and they’re most definitely not missed. The guitar has more bite and it’s more in your face than on the originals.

That brings us to Owens, whose vocals shred the original Barlow vocals. I sincerely hope Schaffer’s game of musical chairs is over and Owens is in the band to stay because, as much as I like the old records, he’s never had a vocalist that did justice to his songs this way. The way Ripper snarls the vocals of “The Coming Curse” makes you believe it’s actually the antichrist speaking in a way that Barlow’s voice never could.

I usually hate it when a band messes with songs that I know and love, but this is a very big exception to that rule. I’m pumped to hear the rest of the record now. The only bad thing about this EP is that I’ll have to wait four or five months to hear more.

Listen to a sample of "Ten Thousand Strong."


Buy Overture of the Wicked

Read my reviews of past Iced Earth albums
Posted by Fred Phillips at 8:39 PM