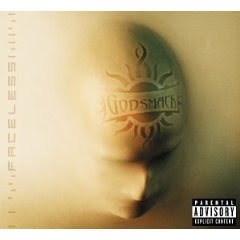 Godsmack roared onto the nu-metal scene with their self-titled 1998 album, one of the most impressive debuts in recent memory. Their second effort "Awake" was a solid album, but lacked the individuality of the first. But with "Faceless," the band finally gives its fans a worthy follow-up to their debut.

Sound-wise, there's not much that's changed with Godsmack since 1998. They still blend the moody grind of Alice in Chains with the commercial crunch of Metallica's "Black Album," then throw in a little extra flavor of their own with singer Sully Erna's distinctive vocals. What makes "Faceless" superior to their last offering is the catchiness of the tunes.

"Faceless" is filled with solid rock grooves that will have listeners bobbing their heads and singing along. There are a number of strong performances, from "Releasing the Demons," with its funky bridge delivery, to the catchy riff of "Dead and Broken." Even though it got a little old last summer, "I Stand Alone" - originally from the "Scorpion King" soundtrack - is still a great song.

The vitriol-filled rant "I Fucking Hate You" will probably be soundly thrashed by critics, but it's a beautiful song to crank up after a rough day at work - and one of my favorites on the album.

The only disappointment on "Faceless" is the melancholy "Serenity," this album's answer to the band's hit "Voodoo." While "Serenity" is a good song, it lacks the mystique of the former.

Of all of the hard rockers to hit the scene in the late 1990s, very few have staying power for the long haul. "Faceless" proves that Godsmack is one of those.

Get "Faceless."
Posted by Fred Phillips at 6:08 PM