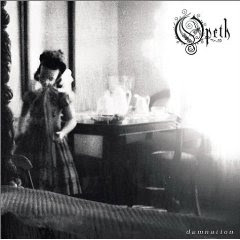 It's not every day you get to invoke the name of James Taylor when talking about a death metal band, but I can think of no better comparison for Opeth's "Damnation." The companion piece to last year's moody masterwork "Deliverance" has more in common with the folksy singer-songwriters of the 1970s than Opeth's previous albums.

Unlike some of their counterparts, Opeth are no strangers to melody. For quite a while now, they've danced on the edge of an album like "Damnation" with dreamy acoustic passages and soft refrains. But they've never taken it quite as far as they do here.

Dark and moody, "Damnation" has no distorted vocals and very little distorted guitar. It's a bold album for a band associated with the more extreme subgenres of metal, and one that's likely to draw those dreaded cries of "sellout" from the hardcore stalwarts of death metal.

But a closer listen to the album will reveal the truth of things. It's a different approach, but the feel of the album is similar to "Deliverance." If anything, "Damnation" draws deeper emotions from the listener with its sparse arrangements and Mikael Akerfeldt's understated vocals.

Distorted guitars, one of the hallmarks of the metal genre, are used sparingly and only to provide depth, texture and ambience to the music on songs like "Closure." Other songs, like the powerful "Death Whispered a Lullaby" don't really need them at all. The dark lick under the Akerfeldt's crooning of "Sleep My Child" on the chorus are more than enough to get the mood across.

This album should silence critics that say extreme metal bands use distorted vocals and guitars to hide a lack of ability. While it may be true in some cases, it's certainly not in all - and especially not in the case of Opeth.

"Damnation" features some excellent guitar work and is as emotionally moving as any music being produced today. It may throw their fans for a loop, but those who listen with an open mind will find perhaps Opeth's best work to date.

Get "Damnation."
Posted by Fred Phillips at 8:44 PM