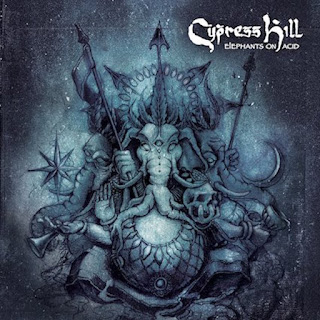 I can count on one hand – with fingers left over – the number of hip-hop acts I get excited about hearing new music from. Cypress Hill, though, is at the top of that list.

I was a metal kid in my early 20s who, with a couple of notable exceptions, hated hip-hop with a passion when I first heard Cypress Hill through a friend and co-worker at the fast-food joint where I was working my way through college. He was a black hardcore hip-hop fan from California, and I was a white redneck metalhead from Louisiana. We often taunted each other, good-naturedly, with our respective music while we worked. That was his intent when he popped a Cypress Hill disc in the little boom box, but there was something about this group that caught my attention. I couldn’t put my finger on it, but they had a different vibe that I really liked – and it didn’t hurt, I guess, that one of the first songs he played was “I Ain’t Goin’ Out Like That,” which sampled Black Sabbath’s “The Wizard.”

As the years went on, the crossover with my listening preferences became more obvious, as Cypress Hill began to dabble in my music, releasing a rock record themselves. In recent years, two of the three primary members have launched metal-related projects – Sen Dog with Powerflo and B-Real with Prophets of Rage.

But this isn’t about my history with the group, it’s about their first record in eight years, Elephants on Acid. I know it’s a wild theory, but I’m willing to go out on a limb and say I think drug use might have had something to do with the making of this album.

DJ Muggs is back in the producer’s seat for this one, and the result is a much more cohesive record, even if the concept fails in some ways. It’s heavily influenced by psychedelic rock, as you can hear in the first single “Band of Gypsies,” which convinced me to pre-order the album immediately and has been in heavy rotation on my stereo for the past couple of months. The song is a hard-hitting piece with a heavy middle-eastern flavor, and vocals on the intro and chorus done in Arabic by Egyptian artists. In my opinion, it’s quite possibly the best thing they’ve done since Black Sunday, and it’s also the most straight-forward thing to be found on this record.

Despite its 21-song track list, the album clocks in at about 50 minutes. That’s because many of the tracks are short interludes. Most of them work well in the context of the album as a whole – or an acid trip, I suppose – but won’t stand on their own very well. They have their moments, particularly “The 5th Angel,” which features ominous keys that would be right at home in a creepy horror movie, but at the end, they leave me feeling that there’s not a lot of meat on the record.

Cypress Hill stacks up a couple of solid tracks in the early going with “Band of Gypsies” and “Put Em in the Ground,” which continues the hard-hitting feel while also delivering a good hook. That’s something that’s missing on many of the songs here. They sprinkle a few more heavy hitters through the record. “Locos” will send fans back in time, putting them in mind of Temples of Boom, and “Warlord” brings it back late in the album with a blast of aggression that’s much needed at that point.

The third “real” song, “Jesus Was a Stoner,” gives us a glimpse of where things are headed. You expect some trippy stuff with Cypress Hill, but this is over-the-top even from them. Still, the track has its charms even if it perhaps drones a little. “Pass the Knife” blends the two early styles, but seems far too laid back for the gangsta-flavored lyrical content.

“Oh Na Na” picks the mood back up with a stoner celebration that’s more along the lines of what fans expect from Cypress Hill. It’s a fun song with an infectious hook that will stay stuck in your head. It’s something of a sister song to the outstanding “Crazy,” which comes near the end of the album, and is by far the most fun you’ll have in these 21 tracks. A circus-like beat underlays B-Real’s manic vocal delivery, and it’s punctuated by a chorus hook delivered in a sultry and jazzy female vocal that will have you singing “we ain’t going home ‘til the motherfuckin’ sun” for the rest of the day. There’s not enough of these types of songs on the album to offset the stranger explorations.

Elephants on Acid ends in a strange sequence, beginning with “Muggs is Dead,” which is like something from the soundtrack of an early animated short with a bunch of cartoon-ish voices just saying “Muggs is dead” over and over for two-plus minutes. Then comes “Blood on My Hands” which has a very interesting rootsy and blues-like feel outside of the rapped vocals. I like it, but I almost want to hear the other song that’s going on in the background. Finally, they close with “Stairway to Heaven,” which certainly references the Led Zeppelin classic, but doesn’t sample it or directly pick anything up from it. It’s the longest track on the album, and to me, is a not a great way to end it, as the stairway doesn’t really seem to go anywhere.

I also leave this record thinking Sen Dog is underutilized. He’s always been the hardcore hammer that comes in to offer the counterpunch to B-Real’s more energetic vocal style, and he does that marvelously on “Band of Gypsies,” bringing a badass cool to that song. Though he has moments on the rest of the album, I really don’t feel his parts hit that way again.

Ultimately, Elephants on Acid is a good record, but not the great one that I hoped for after hearing that first salvo. There are some very strong tracks, but they get bogged down in the psychedelia and trippiness, and the album never finds its full energy, becoming more of a drone overall. An hour-long acid trip is cool as a concept, but not so easily turned into an entertaining album for people who aren’t stoned – unless you’re Pink Floyd … maybe.

Points here for again doing something different and keeping it interesting, but I’m guessing that most fans will do the same thing I will – pick and choose those Cypress Hill standout tracks to add to their phones and players and leave the other pieces of the concept to be forgotten on the hard drive.