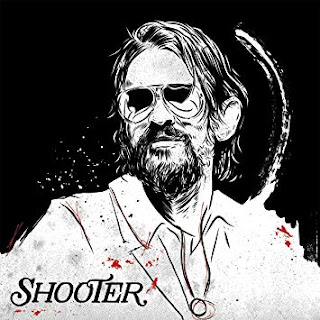 Shooter Jennings decided to title his return to country music after himself, but it could just as easily be called Junior or Bocephus. Much of the record is simply a love letter to one of his influences – Hank Williams Jr. That’s not a bad thing, though.

The love begins flowing from the very first track, “Bound Ta Git Down,” which is Shooter’s unabashed reworking of Hank Jr.’s “Born to Boogie.” The life experiences recounted in the lyrics belong to the singer, but the rocking boogie-woogie rhythms and melodies are mostly Hank, with some notable influence from Charlie Daniels. Despite its derivative nature, though, it’s still a high-energy and fun way to start this record.

That sets the tone for nine songs that are, for the most part, rooted firmly in the 1980s country sound that Shooter Jennings grew up with. Shooter is a record about having a good time, largely upbeat, and occasionally shallow, but with deeper moments. Songs like “D.R.U.N.K.” and “Do You Love Texas?” certainly don’t break any new ground in country music. In fact, they’ve both been done many times, but that doesn’t keep them from being fun.

One early exception is “Living in a Minor Key,” which originally appeared on an album honoring the late George Jones. Like the rest of the album, it features many of the staple subjects of country from the 1970s and 1980s, but it’s a little more introspective than the party tunes.

In the same vein is “Shades & Hues,” one of the strongest moments on the album. It once again pays tribute to Hank Jr. in the chorus, where he says he’s “cranking Major Moves,” a nod to arguably his best record. The song also would have been right at home on one of Hank’s albums of the 1980s.

But Bocephus isn’t the only country legend you’ll hear represented. The album turns upbeat again with “I’m Wild & My Woman is Crazy,” which gives me a little of the vibe of one of George Strait’s older, more rocking tunes – the lyrics notwithstanding. The toe-tapper “Rhinestone Eyes” shows shades of Shooter’s legendary father Waylon Jennings, which is to be expected.

While Shooter is undeniably his return to pure country, there are still shades of his rock and experimental side, though very subdued, on “Fast Horses & Good Hideouts.” The song has a slightly different feel from the rest of the album, and some of the atmospherics that marked his Hierophant project, Black Ribbons.

That influence also comes out a little on album closer “Denim & Diamonds,” which is far and away the strongest song on the record in my mind, and a great way to close it out. The song has a dark groove with Southern rock influence and maybe a few shades of Pink Floyd. It’s the kind of song that made me love Shooter Jennings’ work in the first place – rooted in country, but not limited by the genre.

Though a bit short, and at times, perhaps, a bit cliched, Shooter is a welcome return to Jennings’ country and Southern rock roots after a long time wandering in the experimental desert. While that period provided us with a few entertaining moments, this is where the second generation artist really shines and where he belongs. It’s good to have him back.

Posted by Fred Phillips at 8:53 AM