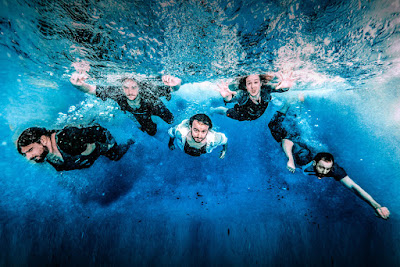 If you take off work, pull your kid out of school and drive five hours to go to a club show, you may have a metal problem.

If you’ve followed my ramblings for the past decade or so, you’ll know my love for all things Christopher Bowes, so there was no way that I was going to miss a U.S. tour featuring both Alestorm and Gloryhammer, even if I had to do all of the above to get there. Which I did. And it was more than worth it.

In all honesty, things didn’t start out so well. About an hour or so before the show, which was at an outdoor venue, rain moved in, giving everyone a good soaking.

Then my son, who shares my enthusiasm for both bands, wanted a Gloryhammer shirt. (Actually, he wanted an Alestorm shirt, too, but I had to delicately deny his request for the one with lyrics from “Mexico” on the back without actually explaining why he couldn’t be walking around in a shirt that said “tequila and a donkey show.” I’ll just let him think I objected to the tequila part.)

The merchandise booth was set up, and there was a guy there, but he refused to sell anything until 7 p.m., when the doors opened. Maybe that’s some sort of rule, but it seems silly to have all of the merch there, a guy to take money and a line of willing customers, but not sell until a set time. So, when the doors opened, instead of entering the venue, we waited in the merch line, only to get to the table and have the guy shut down because a light sprinkle of rain began again. The end result was that we were among the first people at the venue, but among the last to get to our spot on the balcony – still with no T-shirt.

I’ve been looking forward to this show for months, but I was aggravated at that point. Luckily, we found some kind and friendly souls that were willing to squeeze over to let us get a spot at the rail where we could see the stage well. That’s where things began looking up again.

Opening act Sworn to the Sword, a Texas-based folk metal outfit, took the stage around 7:30 for a short but energetic set of originals and a cover of Turisas’ “Hunting Pirates” in honor of the headlining band. Like me, I would guess that most people in the venue were unfamiliar with them, but the show was well-received, and they warmed the audience up quite nicely for the main event.


Gloryhammer stormed the stage a little after 8 p.m. with a blistering version of “Rise of the Chaos Wizards,” the title track from their most recent record.

I was hopeful that Bowes would don the cloak of the evil wizard Zargothrax behind the keys for the band, but we instead got the touring version of Zargothrax – who, not by accident I’m sure, bears a striking resemblance to Bowes. Like the rain, though, that mild disappointment did nothing to dampen the spirit of their performance.

The band launched into the epic “Legend of the Astral Hammer” next, where the artifact in question made its first appearance, with vocalist Thomas Winkler (aka Angus McFife) hoisting it heroically at the front of the stage to the crowd’s delight.

From there, the characters began to get their moments. Ser Proletius, Grand Master of the Templar Knights of Crail (guitarist Paul Templing) started off “Hail to Crail” from the band’s first album. Likewise, Hootsman, Barbarian Warrior of Unst (bassist James Cartwright) got the spotlight (and rousing chants of “Hoots” from the crowd) on “The Hollywood Hootsman.” We also got the epically titled “Quest Lords of Inverness, Ride to the Galactic Fortress!” and “Set the Universe on Fire.”

I did miss “Goblin King of the Darkstorm Galaxy,” a personal favorite, in the show. I was looking forward to singing along, but they played a slightly shorter set than on previous dates of the tour, eliminating that one, as well as “Magic Dragon.” Maybe next time. And as much fun as I had at this one, there will be a next time.

The great final battle was fought with a couple of tracks from the band’s debut Tales from the Kingdom of Fife. My son and I belted out the lyrics to “Angus McFife” along with Winkler, just as we do every time it comes on the stereo in my truck, only it was a lot more fun with a few hundred friends joining in. Then, in the finale, “The Unicorn Invasion of Dundee,” Angus McFife finally put down the evil Zargothrax with the Hammer of Glory in a super campy, but incredibly fun stage battle that left the audience cheering.

If there was a face in the Gas Monkey without a grin on it once Gloryhammer’s set was done, then the person it belonged to doesn’t have any sense of fun or adventure. At least in Dallas, the band’s first assault on the U.S. was a rousing victory.


The rain picked up again a little as the crew prepared the stage for Alestorm, but no one seemed to care, starting a sing-along with Queen songs playing over the loudspeakers as we waited out the intermission. If anyone did take cover, they were definitely back out and in full throat as the headliners took the stage after someone with a sense of humor played the theme song from “Blazing Saddles” to welcome them in.

They dove right off the plank of their pirate ship with fan favorite “Keelhauled,” and the crowd responded, singing the chorus back at the stage and pumping fists in the air in time to the “yo-ho-hos.” It’s not often that you go to a metal show where every single song is a crowd sing-along, but that’s how it worked from the time that Gloryhammer took the stage to Alestorm’s final song. It’s a testament to Christopher Bowes’ mastery of a great hook, and probably owes a little to the alcohol consumed that night as well – though without any of that fueling us, the boy and I were as loud as anyone, belting out all of our favorites.

It was quite the interesting night, as the crowd was treated to an inadvertent pratfall by Bowes, a budding bromance between the singer and guitarist Mate Bodor, a rapping shark and, of course, the ever-present giant inflatable rubber duck.

Bowes hurled good-natured insults at the crowd all night as they plowed through favorites about drinking and plundering, like the eponymous “Alestorm,” “The Sunk’n Norwegian,” “Mexico,” “No Grave but the Sea” and “Nancy the Tavern Wench.” Before “Bar und Imbiss,” Bowes asked the crowd if there were any Germans here, to which a great many people a long way from Germany cheered, prompting him to dedicate the song to Germans and “people who cheer for random shit.” Those same people joined him heartily in the beer mug-waving chorus to the song.

Christopher Bowes also proved that he could laugh at himself. At the beginning of “1741 (The Battle of Cartagena),” one of the few more serious (well, as serious as Alestorm gets) epic pieces, he slipped on the wet stage and took a fall. He hopped up and continued the song like a champ without missing a beat, though his face showed he was clearly amused and a little embarrassed about the situation. Later, he told the crowd you couldn’t feel like you’d made it until you slipped down on stage and made a “tit” of yourself.

I kept watching the crowd for a “boat” to start – a dance unique to the Alestorm audience where an open space forms, parting the audience, and people line up in the middle to row. Bowes tried once to clear the space for it, but the floor area was packed pretty tightly, and he instead settled for egging people into a big mosh pit.

One of the most unusual moments of the night came with the already-odd cover of Taio Cruz’s “Hangover,” when a shark jumped on to the stage for the rap section of the song. More accurately, I suppose, it was a guy wearing a shark head, not a full shark, but it was goofy and an absolute blast as he went on to sing the chorus and gnaw on band member’s faces for the rest of the tune.

The main set ended strongly with two more fan favorites, “Captain Morgan’s Revenge” and “Shipwrecked,” as the band left the stage for a brief break with the crowd clearly wanting more.

They riled fans up another notch with the encore opener “Drink,” as everyone joined in shouting the “we are here to drink your beer” chorus. Then Bowes returned to taunting the audience, picking on someone in the first few rows who had requested “Wolves of the Sea” by holding up a phone with the request typed on the screen. He gave the fan a bit of a hard time about it, all in fun, while also granting the request.

The night finished the only way that it could, with Christopher Bowes telling us, “you’ve been an audience,” and explaining that he was going to tell each and every one of us how he felt before launching into “Fucked with an Anchor.” What followed was three and a half minutes of middle fingers, drunken singing, absurd amounts of profanity and a rollicking good time.

I can pretty safely say that despite the weather and whatever else might have happened before fans arrived at the venue, no one left the Gas Monkey unhappy. And, yes, on the way out I was in such a good mood that I even grudgingly bought my son his Gloryhammer shirt from the merch guy who had made me angry earlier – though the one I wanted was sold out by that time. You just can’t hold a grudge after a show like that.

It was also probably the first concert that my son and I both enjoyed equally. We were both pumped, both hoarse from hours of singing, and both giddily happy at the end.

I’ll use some time off and drive five hours for that any day.
Posted by Fred Phillips at 10:22 AM