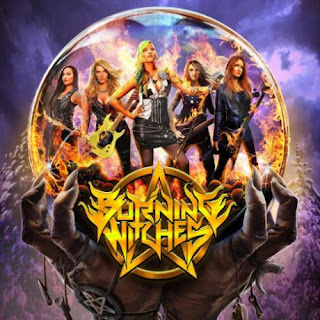 My dismal 2017 would have been a good deal brighter if I'd discovered this record last spring when it came out. I picked up on the single for "Executed," the first track from their upcoming sophomore release, and I was impressed. This record wears its Judas Priest influence on its sleeve, but it's done fantastically well. Given that it's an all-female band, the comparisons to Doro will definitely come, too, but to be honest, I think these ladies do it better all-around.

This album is loaded with fantastic guitar riffs from Romana Kalkuhl and Alea Wyss (no longer with the band). I'm going to assume Romana handles the leads on the record, and I give her props, too, for some hot licks. Vocalist Seraina Telli has amazing range, which she shows off right from the start with a glass-shattering scream on "Black Widow" to open the album.
The eponymous "Burning Witches" is one of the strongest songs on the record with a great hook, and dare I say that I hear some shades of Stevie Nicks in Seraina's vocals on the chorus. We see another side of her vocals on "Bloody Rose" with some growls on the chorus. "Save Me" has a more bluesy and emotional feel to it, and you can hear a little more of that Stevie Nicks/Fleetwood Mac influence that's suppressed on the heavier songs. The riff from "We Eat Your Children" just punches you in the chest, and they close the album with an absolutely vicious cover of "Jawbreaker." It's not one of my favorite Priest songs, but I really like this version.

The lyrics are sometimes a bit cheesy, particularly on songs like "Metal Demons," but that's in keeping with the old school vibe, too. And occasionally when they go for a heavier sound, they seem to be pushing a little out of their comfort zone. But there's really not much I can say negative about this album. It's put a big grin on my face, and I'm loving it.

I saw this band referred to as Judas Priestess, and I can't describe them any better than that. I think a lot of the newer traditional metal bands miss the mark, but Burning Witches really captures the classic feel and sound. They're not imitating old school, they're living it. I can't wait to pick up their second album, which is due out in November.

Check out: "Black Widow," "Burning Witches," "Bloody Rose," "Save Me," "We Eat Your Children," "The Deathlist," "Jawbreaker"
Consider: "Dark Companion," "Metal Demons," "Creatures of the Night," "Creators of Hell"
Skip: I'm not skipping anything on this one so far.

Posted by Fred Phillips at 9:33 PM