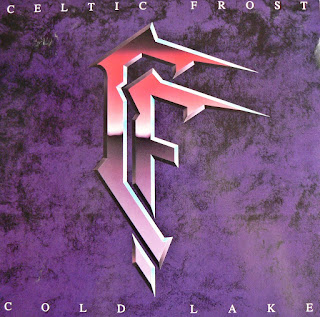 In the mid-1980s, Celtic Frost, along with contemporaries like Venom, Hellhammer and Bathory, was one of the pioneering bands of what would become death and black metal. The band’s first two albums – Morbid Tales and To Mega Therion – helped lay down the template for what those styles would become.

Their third outing, Into the Pandemonium, marked a change in style, opening with an unlikely cover of Wall of Voodoo’s “Mexican Radio,” and incorporating many new and jarring influences for fans. But for all its strangeness, that record still doesn’t draw the ire of metal fans like 1988’s Cold Lake.

Fans often refer to Cold Lake as a glam record. That’s not quite accurate, but it’s certainly easy to understand with song titles like “Seduce Me Tonight,” “Juices Like Wine” and “Dance Sleazy.” The video for the single “Cherry Orchards” doesn’t help much either, featuring the band in full-on teased-hair, rock-star pose striking mode – something that’s hard to imagine listening to those first two records. Musically, though, the song is a little gruffer and rougher than most of the late 1980s glam scene with perhaps a little more of a punk influence. That doesn’t make it a good song. Warrior’s vocals are absolutely awful and combined with the video makes it pretty laughable.

There are some truly terrible moments on Cold Lake, like opener “Human,” a minute-long intro piece that features a rap-like delivery from Warrior. But it’s not all awful. We get a strange mix of thrash-influenced riffs and 1980s cock rock, which has its rare moments that are often overshadowed by the bad. That’s exemplified by the second song, “Seduce Me Tonight.” This one’s got a pretty nice guitar riff that’s certainly heavier than their contemporaries of the time, but the lyrics are absolutely awful.

“Petty Obsession,” on the other hand, is not a bad song at all. It reminds me quite a bit of a less-polished Megadeth tune, and Warrior’s vocals, while poor, are probably no worse than most of Dave Mustaine’s. “(Once) They Were Eagles” follows that same theme, with a driving thrash riff and some nice bass work, too. Though a bit by the numbers, it’s easily the best piece of music on Cold Lake.

They slip back into the glam/cock rock arena a little more after that for the aforementioned “Cherry Orchards” and “Juices Like Wine.” “Little Velvet” has some of that, but the main riff reminds me of Judas Priest – maybe something from Point of Entry.

“Blood on Kisses” shifts directions yet again, bringing in more of the punk influence. It sounds a bit like a thrashed-out Misfits tune at times.

Despite an intro that makes it sound like it’s going to be complete ‘80s rocker, “Downtown Hanoi” saves itself with a nice groove, but the shouted “downtown” vocal on the chorus is incredibly annoying.

Though its title is perhaps a little too similar to a Poison hit of the same year for fans, “Roses Without Thorns” is another one of the highlights of this record, blending some NWOBHM and thrash sounds. It’s a very listenable track, which can’t be said for most of the songs here.

So, does Cold Lake deserve all of the hate that it gets from metal fans? Most definitely. But the problem is less because of a supposed commercial direction and more because it’s just a lousy record. It sounds, to me, a lot like what it is – a group of guys who weren’t meant to be together, playing a style of music that doesn’t really fit them.