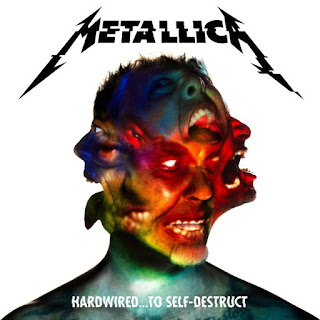 So, I’ve given this new track from Metallica almost 24 hours and quite a few listens to settle before I sat down to write this – because my initial reaction to the song was not good at all, and I didn’t want to go with a knee-jerk. I wanted to try to give it a fair hearing and a chance to grow on me. A day later, my reaction is better, but still a little “meh.”

To be honest, there have been times in Metallica’s career that I would have rejoiced to hear a song like “Hardwired.” Had it arrived in 1998, I would have been jumping up and down and celebrating. Since the 1990s meltdown of the band, though, fans have seen a new evolution. Beginning with the rough and raw St. Anger in 2003 (more thoughts on that to come in my Metal Meltdowns series) to a really good outing in 2008’s Death Magnetic, despite its aural challenges.

What I hoped for was a continued evolution on that path. Eight years later, I hoped that they had honed and perfected that sound. I’d hoped that if St. Anger was the Kill ‘Em All of this version of the band, then the new album would be the Master of Puppets. Yes, I realize that expectation was way, way too high, but given the quality of music that other classic thrash bands are putting out there this year, I didn’t think it was beyond the realm of possibility.


What “Hardwired” delivers, though, is more of the same Death Magnetic sound, only flatter and with less energy. It sounds, if I’m being honest, a bit like a left-over track that wasn’t good enough to make the last album. For an eight-year wait, that’s pretty disappointing.

The song starts strong enough with pounding drums from Lars Ulrich and jabbing guitar rhythm, but from there, it just begins to sound like retread of Death Magnetic material. James Hetfield’s vocals just don’t seem to have any fire, and the “we’re so fucked … shit out of luck” chorus seems more juvenile than angry to me.

I do really like the part of the song after Kirk Hammett’s solo, where we get an amped up version of the riff and James kicks up his vocal a bit. I’ve seen a lot of comments online about how “Hardwired” sounds like the old Metallica, but that’s the only moment in the song where I really get that feeling, and I wish it lasted longer. There’s definitely a “Damage, Inc.” sort of vibe coming off that brief piece for me.

The mix once again seems problematic. It sounds a little flat and missing some bottom end, but that’s been a common problem for the band over the years.

On first listen, I hated the song. I called it lifeless and passionless in a social media post. Many listens later, I will admit that it has grown on me very slowly. I’ll probably never love “Hardwired,” but I’m a long way from the visceral dislike and disappointment that I had on first listen.

My hope is that Hardwired … to Self Destruct follows the same path as Anthrax’s outstanding For All Kings earlier this year. I also disliked “Evil Twin,” the first song released from that one, yet the album is far and away my favorite of the year so far. (Of the last several years, in fact.) And “Evil Twin?” Yeah, I kind of like it now.

I’m still hopeful for the full Metallica album, just disappointed in our first taste. After the eight-year wait, I expected something a little more impressive. I’ll admit that my expectations were probably way too high. Here’s hoping that I’m sitting at this keyboard in November eating my words.