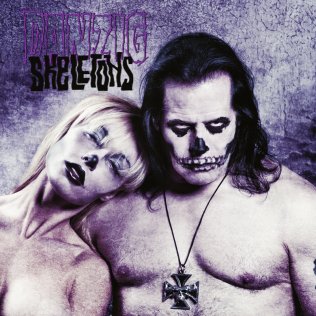 Glenn Danzig has a pretty good history with covers.

His version of Elvis Presley’s “Trouble,” which appeared on the Thrall/Demonsweatlive EP is, despite some unnecessary lyrical changes, a near-perfect metal cover of the tune. In fact, it ranks as one of my favorite cover songs ever. He also unleashed a solid version of T. Rex’s “Buick Mackane” on his Lost Tracks collection.

Both of those songs are right in his wheelhouse. The selections on his new covers album Skeletons, though, offer some surprises with covers from Aerosmith, ZZ Top, and … the Everly Brothers?

One of his reasons for doing the album was to record a couple of tunes from biker movies – “Devil’s Angels,” the theme from the film of the same name, and “Satan” from the movie Satan’s Sadists. “Devil’s Angels,” which also serves as the lead single from Skeletons, will probably excite fans of Danzig’s time in the Misfits and Samhain. He delivers a ripping, punk version of the song and the rough mix of the record captures the mood of The Misfits.

“Satan” doesn’t fare quite as well, but is still definitely in the Danzig power zone, so we’re off to a pretty good start.

Track 3, “Let Yourself Go,” brings him another winning Elvis Presley cover. He keeps a little of the Elvis swagger, but combines it with a crunching electric guitar. It’s no secret that the King was one of Danzig’s primary influences, so it’s no surprise that he covers him well. There have been rumors of a full album of Elvis covers in the past, and I’d definitely be up for that one. “Let Yourself Go” doesn’t equal “Trouble,” but it’s still solid.

That, though, is where Skeletons starts to go off the rails a little bit.

Up next is Black Sabbath’s “N.I.B.” You’d think that would be a slam dunk, but it’s actually a little rough. Danzig’s take on it doesn’t flow nearly as well as the original, and sounds a little choppy, particularly on the verses.

Then he takes on a surprising Aerosmith song in “Lord of the Thighs.” It’s fairly faithful melodically, but he puts a lot more crunch in the main guitar riff. I like that part, but Danzig just can’t get the sleazy Steven Tyler swagger that this song needs. It’s also one of the less finished tracks on Skeletons. The drums are hollow, the guitars muted, and the vocals are strained. It sounds more like an unfinished demo.

But perhaps the most shocking choice on the album for me is ZZ Top’s “Rough Boy.” I was thinking maybe one of their earlier, bluesier numbers or one of their later tracks, like something off Rhythmeen that already has that chug. I definitely wouldn’t have pegged a ballad from one of ZZ Top’s most commercial offerings. He tries to transform it into a Danzig song, but it just does not work at all, and the f-bombs he inserts make it seem more juvenile than, well, rough.

Business begins to pick up again with the Young Rascals’ “Find Somebody.” While it also seems like a bit of an odd choice, the guitar riff fits right into the Danzig mold, and the psychedelic strains of the original take on a very dark tone here.

The album closes with that aforementioned Everly Brothers track, “Crying in the Rain.” Surprisingly, I really like this tune. Though I scoffed at Danzig covering the Everly Brothers, this ends up being the highlight of the collection. It has a hollow, melancholy sound to it, and puts me in mind of some of Danzig’s moodier work, like “Sistinas.” It has more depth than anything else on Skeletons, and it’s just a strikingly good cover.

As I mentioned, the mix here is rough. It often sounds like it was recorded in a basement or a garage. In some cases, notably on “Devil’s Angels” and “Crying in the Rain,” that helps. The raw vibe on the first tune adds to the punk feel, and the hollowness of the latter brings an added layer of emotion. In other places, though, the record could have used a little bit of cleanup and polish.

Like most covers albums, Skeletons features surprises both good and bad. On the whole, I don’t think it’s a record that I’ll return to very much, but there are certainly a few tunes on it that will stick.

Posted by Fred Phillips at 2:17 PM