Review: Amorphis, "Under the Red Cloud" 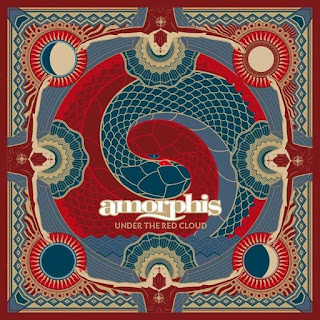 I didn’t think that Finnish folk/death metal outfit Amorphis would ever top 2009’s epic Skyforger. But their latest, Under the Red Cloud, certainly gives it a run for its money.

Under the Red Cloud may be Amorphis’ most folk-influenced record to date, but that makes it no less crushingly heavy when it needs to be.

We see the two sides in the first two songs. The title track opens softly, playing heavily into the folk elements before transforming into a ripping rocker with just a few growls from vocalist Tomi Joutsen. Second track “The Four Wise Ones,” digs in for some good, old-fashioned melodic death metal. We get a break in the middle with some effects-laden vocals from Aleah Stanbridge (Trees of Eternity) before the song ramps back up. Even in its heaviness, though, “The Four Wise Ones” plays to the folk elements with whistles and pipes running throughout.

“Bad Blood” features one of the best pure metal riffs on Under the Red Cloud. It’s another classic melodeath riff, layered under a spacey keyboard line. Joutsen delivers his harsh vocals in a style reminiscent of Amon Amarth’s Johan Hegg, but switches to his captivating melodic style for the chorus. To be honest, I think the true strength of Amorphis over the last 10 years or so has been Joutsen’s vocals. He’s a versatile singer and growler, and he’s the perfect foil for the epic melodies of guitarist Esa Holopainen and keyboardist Santeri Kallio.

My personal favorite riff, though, would have to be the Gaelic-sounding lick from “Tree of Ages.” It’s one of those melodies that puts a smile on your face and makes you want to bob your head and stomp your feet a little. Despite the aggression in Joutsen’s vocal delivery, the song is an uplifting and joyous celebration that just makes you feel good when you hear it.

We get a couple of more exotic numbers in “The Skull” and “Death of a King.” The first of the two manages to sound middle-eastern and Viking at the same time, and that’s not an easy thing to do. The latter opens with a sitar lick that becomes the primary theme of the song when the heavier instruments kick in. Once Joutsen starts growling out the lyrics, there’s a strange pipe playing in the background that once again reinforces the heavier folk influence on Under the Red Cloud.

Since Joutsen joined, Amorphis has always delivered at least one catchy, accessible melodic rocker on each record that might reach beyond their hardcore fan base – “Silver Bride” on Skyforger, “You I Need” on The Beginning of Times, etc. For Under the Red Cloud, that song is “Sacrifice,” and it’s another winner. Though, for me, it’s not the equal of “Silver Bride,” which is a personal favorite of mine, it’s undeniably addictive and will be stuck in your head after a listen or two.

It’s followed immediately by a return to heaviness with “Dark Path,” which features a nice contrast between bellowing growls from Joutsen and a piano piece that sets the tone of the song. The contrast continues on a melodic chorus hook that’s as memorable as anything on the record.

Album closer “White Night,” the softest moment on Under the Red Cloud, takes us to the other end of the spectrum. Stanbridge returns and takes a spotlight role, as she delivers the bulk of the verse vocals, punctuated by Joutsen’s death growls. I’ve always been a sucker for that beauty-and-the-beast vocal approach, and though this is, perhaps, not the traditional application of that style, I still like it. Joutsen also breaks out his melodic vocals on the track before Holopainen delivers an understated, but powerful guitar solo. At first, I thought the soft song was a strange way to end the record, but by the finish it brings a rousing crescendo to what is an incredible album.

In a year that, for me at least, has been largely uninspiring on the music front, Under the Red Cloud is a glittering jewel. It brings together everything that I love about Amorphis – the heavy folk influences, the balance between destructively heavy death parts and hook-laden melodic passages, and the epic feel of the compositions of Holopainen and Kallio. Then it dials everything up to another level. It may not surpass Skyforger as Amorphis’ best, but it’s easily that album’s equal.