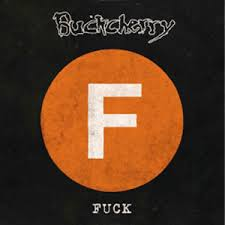 Sometimes there’s a fine line between throwing a middle finger to the world and a desperate plea for attention. It doesn’t take much thought to decide which category Buckcherry’s EP Fuck falls into.

A concept album of sorts, if having the f-word in every song title can qualify as a concept, this EP seeks to play on the somewhat dumbfounding success the band had with the single “Crazy Bitch.”

When Buckcherry released their self-titled debut in 1998, I bought it. I still own it and listen to a couple of the songs on occasion. I thought it was a fun little bit of retro hard rock. Like most of the rest of the world, I promptly forgot about the band until 2006, when all of a sudden, you couldn’t seem to escape them.
The culprit, a profane song by the name of “Crazy Bitch,” that became a hit on satellite radio, which could play such songs without censoring them, and bled over into regular radio as a bleep-filled fiesta of dumb. It was a song without any redeeming qualities — what I’d consider a throw-away joke song on most any other album — but Buckcherry rode it to new heights of popularity.

This new EP opens with “Somebody Fucked With Me,” and the first few seconds of that opening song are as good as it gets. There’s a nice groove to the guitar riffing, and I thought for a second that I was about to be pleasantly surprised. Then the song devolves into an excuse for singer Josh Todd to shout F-this, F-that for a few minutes, and down we spiral from there.

I can forgive a lot — including dumb lyrics and bad concepts — for good music. I’ve had a lot of practice. Unfortunately for Buckcherry, the songs just aren’t that interesting outside of a stray guitar riff here or there. You’ve got a cover of a pop song. The original is Icona Pop’s “I Love It,” which I’m not familiar with and not that interested in looking up after I heard Buckcherry’s train wreck version, “Say Fuck It.” There’s the mandatory boring ballad — appropriately titled, “It’s a Fucking Disaster.” There’s the punk-influenced tune “Fist Fuck.” There’s the attempt at a grooving tune, “I Don’t Give a Fuck.” But there’s not a memorable hook to be found in any one of them. In fact, a few of them make “Crazy Bitch” sound like a rock masterpiece.

More than proving how rebellious and what bad boys Buckcherry are, Fuck really just underscores how the word has lost much of its power through overuse. No one is shocked by it anymore. Are there people who are still offended by it? Sure. Plenty of them. Are they likely to hear this record and march in the streets to protest it, thus bringing that sought-after attention to the band? Not likely. So, they’re left appealing to the Beavises and Buttheads of the world. (Huh, huh, huh,
huh … he said fuck.)

In the ’60s or ’70s, this “concept” might have been shocking. In the PMRC era of the 1980s, it might have been seen as that big middle finger to Tipper and her buds. In 2014, it’s just dumb, and more than a little sad. And it trickles all the way down to the band’s record label (F-Bomb Records) and the oh-so-clever and original promo photo of them all flipping off the camera.

Look, I get it. It’s rock ‘n’ roll. Its very foundation is built on sex and partying and, to some extent, acting dumb, but this is the worst sort of thing that the genre has to offer. Is just a modicum of effort and creativity really too much to ask? Then again, given the music on this record, if they hadn’t come up with this “concept” and named the album what they did, would I have bothered to write anything about it? Probably not. So maybe it is working for them.