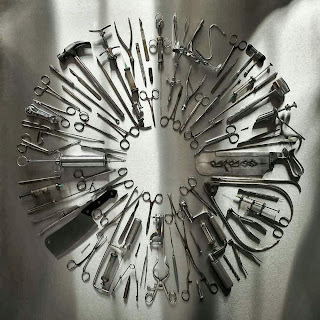 Surgical Steel, the first record since 1996 from reunited English death metal legends Carcass, is probably one of the most anticipated of the year for many metal fans. I can’t really say that I was among them.

I only own one Carcass album, 1993’s Heartwork, which is really the only record by the band that I like.

Death metal, in general, is a hard sell for me. My collection of it is small for a few reasons. I don’t like feeling like I’m being bludgeoned over the head with a snare drum. Blast beats can be quite effective, but often it seems to me that’s the only weapon in many death metal drummers’ arsenal.


Finally, there’s the imagery. There seems to be this competition to see which band can come up with the most repulsive band name and song titles. It’s had quite the opposite effect on me, though. Rather than being sickened or horrified, I’ve always seen it as kind of silly.

That said, I do have to admit to some curiosity when I heard Carcass was releasing a new album. It was enough to get me to listen to the first song released from it, “Captive Bolt Pistol.” I liked it enough to check out the rest of the record, and I was pretty damned surprised by what I found.

Surgical Steel opens with the brief instrumental “1985,” which features some Iron Maiden-like harmonized guitars that build into “Thrasher’s Abbatoir,” where the bludgeoning begins – but in a good way.

I’ve never questioned the technical abilities of many death metal acts, and Carcass is no exception. Guitarist Bill Steer absolutely smokes on this record, and drummer Daniel Wilding delivers a fast, brutal base that complements the music rather than overwhelming it.

As I delved further into this record, I found a depth that I’ve rarely found in a release from the genre. The requisite blast beats and demonic growls are there, but there’s just as much thrash and classic metal influence to be found on the record. That really begins to be felt on “A Congealed Clot of Blood,” one of my favorite tracks here. Yes, they do still go in for the whole gore imagery thing, medical themes being their forte, but I can forgive the song title for the infectious marching thrash riffs that instantly had my head swinging.

“The Master Butcher’s Apron” begins with the expected crazed drumming from Wilding and shrieking howls from Jeff Walker. But after the opening verse, it drops into this big, heavy beast of a guitar riff that has – dare I say it about a death metal record – a wicked groove. As the song progresses, there are some very traditional metal influences that come through. It’s fast and heavy, but also has enough melody to please a guy like me. That’s a tough balance to achieve.

“Non-Compliance to ASTM F 899-12 Standard” takes the melody even further. The title is a reference to a specification for steel to be used in surgical instruments, by the way. But the song begins with another one of those New Wave of British Heavy Metal influenced guitar runs before the blast beats arrive, but even in those there’s a throwback sound with the guitars that are layered over them. The next riff moves almost into hard rock territory before Walker’s vocals remind us that it’s a death metal record. That blast beat and guitar combination returns a few times, and there’s something almost hypnotizing about it. Then Steer cranks out a solo that recaptures the hard rock feel before we’re off and thrashing again. The song is a very pleasant surprise all the way around, as is the album.

There’s more hard rock influence on “The Granulating Dark Satanic Mills,” which has some guitar licks that almost remind me of latter-day Megadeth. The overriding theme on this one is thrash, and I’m more than OK with that. I’ll be honest and say that I have no idea what the numbers Walker’s shouting out in the chorus mean, but I don’t care. It’s bad ass.

And speaking of Megadeth, there’s the opening riff of “Unfit for Human Consumption” which is reminiscent of the classic version of the band. In fact, with Dave Mustaine’s sneer over the music instead of Walker ’s growls, I don’t think the song as a whole would have been out of place on Peace Sells … But Who’s Buying.

Finally, after about 40 minutes of pounding, vicious metal, we reach the final track, “Mount of Execution,” which offers brief respite with an acoustic intro. Don’t get too comfortable, though. It’s short-lived. Pretty soon, we’re thrashing along again, though I have to grant that it’s probably the most melodic and slowest number on the record with several movements over the course of its eight and a half minute running time.

The first listen of Surgical Steel left me surprised and impressed. A month after that first listen, the album still has not left my regular rotation, which surprises me even more. I don’t know if it will lead me to go back and give the band’s older material another chance, but Surgical Steel will certainly take its place next to Heartwork in my collection. It’s that rare death metal record that I can’t get enough of. It achieves the perfect blend of harshness and melody for my ears.

If they keep pumping out records like this, I hope the reunion lasts for quite a while.

Posted by Fred Phillips at 5:07 PM