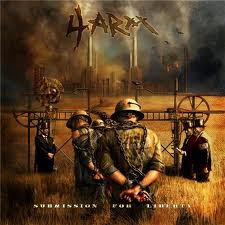 I grew up in the golden age of thrash, and I loved it from the first time I heard it. The precise riffs, the often-complex arrangements and all the power and aggression I needed while still retaining melody and musicality. It was, and still is, my preferred subgenre of metal.

I had the Big 4 – Metallica, Megadeth, Slayer and Anthrax – all in their prime. I had Testament, Exodus, Overkill, D.R.I., Flotsam and Jetsam and several others that I know I’m forgetting at the moment. From the German variant, I had Kreator and Sodom. Out of Canada, I had Annihilator doing their own thing.

Against that lineup of bands, it’s hard for any of the young bands of the recent thrash resurgence to compete.
I often walk away from those newer acts feeling unsatisfied. Either they offer a rote regurgitation of the bands that came before without any new energy, or they try to modernize it and in the process destroy some of the things that I love about the genre. Still, when I hear about a new thrash band, I always check it out. That’s what led me to Australian thrashers 4ARM.

I got a promotional e-mail about their U.S. tour with Testament and Overkill and clicked through the link to their latest album’s title track “Submission for Liberty,” not really expecting any excitement. But the tight opening riff from and slamming drums reached out and grabbed me by the throat. I held my breath waiting on Danny Tomb’s vocals to kick in, and they were just what I wanted – a classic thrash shout. Not too growly or screamy, none of those weird jumps in pitch at the end of each line that so many thrash singers like to do. Everything worked.

The thing that really got me, though, was the vibrant energy in the song. Yes, it draws heavily upon the sounds of the classic thrash bands. It should, and to satisfy me, it must. But there’s a passion and power here that I often find missing in modern thrash bands. 4ARM is not playing a retro tribute to the genre. They’re playing a strong, driven brand of thrash that sounds like it is of the golden era itself.

It’s hard to quantify what is different about 4ARM than their modern contemporaries, but I know it when I hear it, and I hear it all over Submission for Liberty. There are moments of Slayer-style speed, plenty of Metallica-style precision and the more varied approach of Testament. Though, while you can point to moments that remind you of all those bands and more, there’s never a hint of mimicry on this record. There’s a very clear personality to the band, and that’s a big plus.

Fast and heavy is the order of the day, but 4ARM never loses sight of the song. A great example is “Taken Down,” which opens with a thrash staple, the acoustic intro with a more mystical sounding electric lead. It’s a tried and true thrash technique and one they employ well several times across the album. Then the volume gets cranked up as Tomb barks in his best James Hetfield style on the verse, but then there’s a big, catchy chorus to round things out.

Album closer “Blood of Martyrs” is one of the least thrash tracks on the album, but also one of the best. They use the acoustic opening again, this time with some strings instead of electric guitar. That leads to a slow building guitar riff that relies less on speed and more on classic heaviness. Tomb handles the vocals in a mix of Hetfield and Sully Erna on a verse as the song slowly, inexorably builds to the explosion that you know must come, and it does, about five minutes in as the sound cuts to a galloping guitar riff in the right speaker that leads to a full stereo version of the same riff and bashing drums from Michael Vafiotis. Lead guitarist Johnny Glovasa then gets his moments as the album goes out with a bang.

That slow building of songs is another thing that 4ARM does very well. On songs like “Raise a Fist” and “The Warning,” they do go straight for the throat with the speed, but more often than not, they give listeners some atmospheric heaviness to set it up. That works well on “While I Lie Awake,” which essentially gets the album going after opening intro track “Sinn Macht Frei.” But the band hits a peak on “The Oppressed” which opens with a dark piece that reminds me very much of some of Testament’s best work before moving into more familiar thrash territory. It’s also got one of the better choruses on the record.

The band is tight, another must in thrash. Vafiotis lays down some impressive drum tracks, and bassist Andy Hinterreiter and guitarists tombs and Glovasa are locked in step. Submission for Liberty has everything that I want in a thrash album, and though their Rising Records debut serves as my introduction to 4ARM, I’ll definitely be looking to get my hands on their two independent releases. The new crop of thrashers could learn a lot from these Aussies.

Posted by Fred Phillips at 2:19 PM