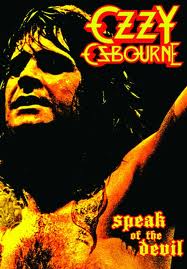 First off, the name of this DVD might be a little confusing. Though recorded on the same 1982 tour, this is not the visual companion to Ozzy’s album of the same name. While that record was made exclusively of his versions of Black Sabbath classics, the setlist on this DVD primarily pulls from his solo works. In fact, we only get a trio of Sabbath songs – “Iron Man,” “Children of the Grave” and “Paranoid” to round out the evening.

The show, filmed in June of 1982 in Irvine Meadows, Calif., highlights a strange period in Ozzy’s career. Guitarist Randy Rhoads, who was responsible for most of the big riffs and searing solos on these songs, had died in a plane crash only months earlier in March. For a time, Ozzy thought that he might not want to go on, revealing in his 2010 autobiography that he told his wife he didn’t want to be a rock ‘n’ roller anymore.

Those feelings, seemingly, hadn’t quite been put on the shelf by the time this show was recorded, as it’s somewhat uneven. At times, Ozzy looks like the madman we know and love, at others, he’s almost uncomfortable on the stage.

The DVD opens with the classically influenced “Diary of a Madman” intro, out of which they blast into a driving rendition of “Over the Mountain,” a personal favorite of mine. I have to admit that I was a little disappointed to not get the full version of “Diary,” but I soon forgot about it.

The set leaves only a few stones unturned from Ozzy’s solo debut Blizzard of Ozz, covering the whole album except for Rhoads’ classical guitar piece “Dee” and “No Bone Movies.” It’s a little short on Diary of a Madman tunes for my taste, as I think that’s Ozzy’s best record, but we do get “Over the Mountain,” Sarzo gets to show off a bit on “Believer” and “Flying High Again” leads into those final three Sabbath tunes.

The show also reveals a bit of the bitterness that Ozzy still had toward his old Sabbath bandmates and their new singer at the time with the presence of a dwarf who pops up several times during the show to bring Ozzy a drink or some other menial task. Ozzy refers to him as Ronnie, an obvious dig at Sabbath singer Ronnie James Dio, known for his short stature as well as his incredible vocals. The dwarf also meets an unpleasant end, being hung from a noose above the stage during “Goodbye to Romance.”

If you’re expecting to get a raw and real Ozzy performance, don’t. The vocals throughout have been, at the least, touched up, and in some cases pretty obviously overdubbed. It’s common practice on Ozzy live albums, but it is occasionally distracting on songs where you know you’re listening to the familiar studio vocal. I don’t mind a few touch-ups, but I’d much rather hear a real live performance warts and all. It’s not like you’re fooling the millions of people who have seen a real live performance.

That complaint aside, the DVD offers a window into a weird time in the madman’s career, and it gives fans a glimpse of a very solid band that didn’t live to make a studio album together. Only Aldridge and Airey remained by the time Bark at the Moon was recorded, Gillis being replaced by Jake E. Lee, and Sarzo being replaced by long-time Ozzy bassist Bob Daisley, who was also a primary songwriter on those albums.

It’s also just nice to once again see the Ozzy that scared parents to death for so long before reality TV stole that.

Posted by Fred Phillips at 3:33 PM