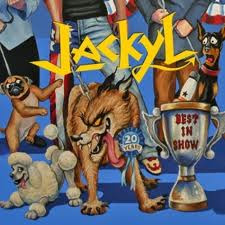 The output from these Kennesaw, Ga.-based rockers has often been uneven since their 1992 debut, but when they hit their stride, it’s great fun. They hit it hard on Best in Show, possibly the best record they’ve put out since their 1994 sophomore outing, Push Comes to Shove.

Best in Show delivers exactly what you’re looking for in a Jackyl album – sleazy party anthems that owe more than a small debt to the likes of AC/DC and classic Ted Nugent.

You have to listen no further than the first single from the record, “Screwdriver,” to see what this album is all about. Yeah, singer Jesse James Dupree’s pregnant pause in the delivery of the chorus – “I wanna screw … driver” – is completely predictable, but it doesn’t make it any less entertaining.

Dupree and Co. have a lot of swagger and attitude back on this record – not that I’m guessing they ever lost it, but it just didn’t show up as heavily on some of their other outings. Best in Show is loaded with catchy tunes that will be tough to get out of your head, particularly the stripper anthem “Encore” – likely to be a favorite for years to come in … ahem … “gentlemen’s clubs” all across the South. “Horns Up” is an energetic tune sure to get the crowd going at the live show.

Then there’s “Better than Chicken,” a guilty pleasure sort of song, for sure. If you’re at all familiar with the band, I really don’t have to tell you what Dupree likes better than chicken, but Nugent once wrote his own ode to it. It’s not a song you’re likely going to crank up with the family or a date in the car, but when you’re in there by yourself, it’s blowing out the speakers.

It’s not all great. Surprisingly, I find myself skipping their cover of Dr. Hook’s “Cover of the Rolling Stone.” I thought a song like that would be a sure thing in the hands of Dupree, but the addition of a loud drumbeat reminiscent of Queen’s “We Will Rock You” and Dupree’s chainsaw are both somewhat distracting. The country/Southern rock-flavored ballad “Don’t Lay Down on Me” doesn’t quite work for me either. Then again, I remember fondly the days when the band bragged about not making ballads, too, so that may have something to do with it.

It’s not all about sex and rocking the speakers, either. “My Favorite Sin” captures a nice blues/Southern rock vibe. It’s fairly sedate by Jackyl standards, but it’s also one of the strongest pieces of a few here that show there’s more to the band than a healthy dose of raunch.

“Eleven” is reminiscent of something off Push Comes to Shove, and Dupree’s vocal delivery in the early going will certainly bring to mind early Van Halen-era David Lee Roth.

Perhaps the strangest piece on the album is its final track, a cover of Run-DMC’s “It’s Tricky,” featuring Darryl McDaniel. Jackyl first teamed up with DMC a few years ago on a cover of Mother’s Finest’s “Like a Negro.” The hard rock vibe on that one fared a little better than the rap of “It’s Tricky” does, but it actually ends up being a lot of fun and better than it has any right to be.

Jackyl has never made any secret of where they stand in the rock ‘n’ roll world. They’re raunchy, sleazy, and they definitely back up the stereotype of hard rockers as dirty dogs – come on, the band is named Jackyl and dogs have featured prominently on several album covers, including this one. If you’re offended, well, they don’t really care. Needless to say you’re not going to find any deep, meaningful, life-changing messages in the music. But if you’re looking to get a party started, you could do much worse than cranking up Best in Show. It’s fun, it’s energetic, it’s catchy. It’s rock ‘n’ roll.