Review: "Welcome to the Nightmare: An All-Star Salute to Alice Cooper" 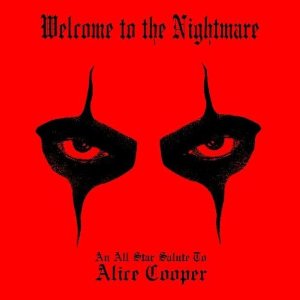 Originally released as Humanary Stew: A Tribute to Alice Cooper on Deadline Records in 1998, this collection of covers has recently gotten a repackaging from Cleopatra Records with a few extra tunes from Iced Earth, Children of Bodom and Icarus Witch tossed in as a bonus.

Though most of the songs are done by a mish-mash of artists thrown together – as was the whole series of tribute albums released by Deadline in the late 1990s – there are representatives from some of the biggest names in hard rock and metal here. On the tracks, you’ll find members of The Who, Deep Purple, Def Leppard, Megadeth, Guns ‘n’ Roses, Dio, Motley Crue, Iron Maiden, the Ozzy Osbourne band, Quiet Riot, Twisted Sister, Dokken and more. There are also a few names you might not expect, like sax man Clarence Clemons and bassist Stu Hamm.

Like all of these tribute albums, Welcome to the Nightmare is hit and miss, but for the most part, the songs here work. With all apologies to the late, great Ronnie James Dio – who does a fantastic version of “Welcome to My Nightmare” with Steve Lukather and the late Randy Castillo – my favorite number is the cover of “Black Widow” by Bruce Dickinson and Adrian Smith of Iron Maiden with help from bassist Tony Franklin (The Firm, Jimmy Page, Whitesnake), drummer Tommy Aldridge (Black Oak Arkansas, Pat Travers, Gary Moore, Ted Nugent) and keyboard player Derek Sherinian (Dream Theater, Alice Cooper, Billy Idol). It’s Dickinson who makes the song with his maniacal and completely over-the-top performance of the spoken intro, which was originally performed by Vincent Price. He carries that character over into the performance of the vocals, and as good as some of the other songs here are, this one is hard to beat.

Close behind, though, is the cover of “Cold Ethyl” that features Vince Neil and Mick Mars of Motley Crue, along with bassist Billy Sheehan (David Lee Roth, Mr. Big) and drummer Simon Phillips (Judas Priest, The Who, Toto). I mean, come on, there’s no more perfect Alice Cooper song for Motley Crue to cover, and it’s just as sleazy as you’d expect.

There are some misses. Don Dokken and John Norum turn “Eighteen” into a 1980s-drenched pop metal affair that just loses the whole spirit of the song. Others, you’d like to put a little more of themselves into it. With a version of “Elected” by Steve Jones of the Sex Pistols, Duff McKagan and Matt Sorum of Guns n’ Roses and Billy Duffy of The Cult, you’re hoping for a more punked-up performance, but they play it fairly straight. Other versions are faithful, but not very energetic. Dave Mustaine and Marty Friedman’s cover of “School’s Out” doesn’t fare nearly as well as their Megadeth cover of “No More Mr. Nice Guy” did. “Under My Wheels,” headed up by Joe Elliott and Phil Collen of Def Leppard suffers from a lack of bad attitude in the vocal department, but gets a big boost from Clemons’ too-brief sax solo.

Though Megadeth’s version of “No More Mr. Nice Guy” is better than the one Mustaine delivers here, it’s hard to argue for the switch when you have The Who’s Roger Daltrey teaming up with Slash and Carmine Appice for that song. Though they play it fairly straight, Daltrey’s theatrical vocal brings a new nuance to the tune. Another hard rock legend, Deep Purple’s Glenn Hughes, takes the mic for a soulful, bluesy rendition of “Only Women Bleed,” that might be the best individual performance on the record.

Phil Lewis of L.A. Guns turns in a surprisingly strong showing on “Billion Dollar Babies,” joined by George Lynch (Dokken, Lynch Mob), Hamm and Sherinian. Next to Dickinson, the person having the most fun on the record may be Twisted Sister vocalist Dee Snider, who belts out “Go to Hell” with sneering abandon, backed by guitarist Zakk Wylde and Rudy Sarzo and Frankie Banali of Quiet Riot.

Of the tunes that were not on Humanary Stew, none are as good as the other numbers here. Iced Earth turns “Dead Babies,” not one of my favorite Alice tunes, into a good Iced Earth song, but Matt Barlow’s vocals are a little overly dramatic. Icarus Witch has the same issue with a fairly faithful cover of “Roses on White Lace,” and Children of Bodom just seems to rush through “Bed of Nails” from 1989’s Trash, one of Cooper’s most commercial outings.

Overall, though, there’s far more good than bad on Welcome to the Nightmare, and there are, in fact, some absolutely killer tracks. Though you’ll never match Cooper’s originals, this is a great collection for either Alice fans or fans of the bands involved.

Posted by Fred Phillips at 7:11 PM