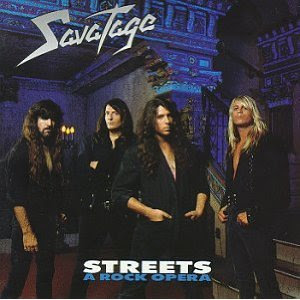 Hopefully, you’ll forgive me for a little sappiness on Christmas. Since I’ve done the metal Christmas song bit a couple of times, I thought I’d try something a little different this year. Instead, I’m going for inspirational hard rock and metal tunes. I’m not talking about religious tunes (as some of the choices will clearly show) or, necessarily, songs that will inspire others. These are simply songs that have inspired or moved me for some particular reason over the years. Feel free to discuss your own in the comments section, if you wish.

“Believe,” Savatage. In my mind, this is one of the finest rock songs ever written – period. It’s amazing. It’s moving. And no matter my mood, it’s a song that always makes me feel better and more hopeful. It’s far from the only Savatage song that I find inspiring (at least half this list could have been from the band), but it’s far and away the most inspiring.


“Dream On,” Aerosmith. This is one of the few overplayed classic rock songs that I never get tired of hearing. I loved it the first time I heard it, and as I’ve grown older, my own experiences have added to its lyrical meaning for me. I’m still trying to dream myself a dream come true, and when Steven Tyler shrieks it out, it still seems possible.

“First Snow,” Trans-Siberian Orchestra. When I hear this song, I think of my son, dancing around, staring wide-eyed up at the “snow” falling from the roof of the auditorium and trying to catch it when we saw TSO live last year. Those are the moments that life is all about.

“On March the Saints,” Down. Written in the aftermath of Hurricane Katrina, the song offers a nice metaphor for the people of New Orleans from a guy that’s not normally very good with metaphor. It’s great for both football season and as a testament to the human spirit.

“Best of Friends,” Dangerous Toys. I figure most everyone has that friend that they have fond childhood memories of that later took a wrong turn in life. Sometimes, the only thing you can do for those friends is hold on to the good memories. I’m not a big ballad fan, but I’ve always loved this song.

“Watching Over Me,” Iced Earth. I’ve been fortunate in that I’ve not yet had a close friend die, but I’ve had plenty of close family members pass away, and I really appreciate the imagery of the song. It offers at least some measure of comfort for those you’ve lost.

“Fred Bear,” Ted Nugent. I always liked this song. The message rang true with me the first time I heard it. When I lost my father two years ago, it came to mean a little more. When Uncle Nuge is singing about Fred Bear, I’m thinking about him. It all seems to fit.

“Loving the Sinner,” Annihilator. Sometimes you don’t need uplifting. Sometimes you need a kick in the ass. When this record came out, I was at a low point (I know, what a surprise), and Jeff Waters’ chorus to this song, demanding you to “get off of your ass” really struck a chord with me. I still pull it up every now and then when I’m feeling useless.

“Beat the Bastards,” Accept. This is a recent development, and it’s a case of the right song arriving at the right time for me. The viscerally satisfying image of beating the bastards down aside, the song has an appealing message to me about taking chances and following dreams. It was a song I needed.

“Gettin’ Better,” Tesla. I prefer the acoustic version to the original, but I like both. Sometimes you just need to hear that things will get better, and this is a rocking song that delivers the message.

“Escape,” Metallica. To me, this is one of Metallica’s most underrated songs. It’s not one of the tunes you hear all the time, but it’s a great song about being true to yourself.

“Can’t Bring Me Down,” Suicidal Tendencies. Talk about a band that was often misunderstood. The band name kind kind of pigeonholed Suicidal Tendencies in the eyes of some, but more often than not, the underlying message of their songs was a positive one – albeit an angry positive. I’d gladly trade my current situation for the things that were trying to “bring me down” when I first started belting out this tune along with Mike Muir, but it’s still a great screamer when things aren’t going well.