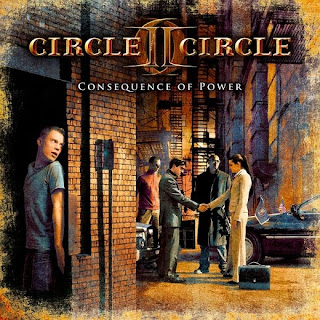 I’ll preface this review, as I usually do, by admitting to my fanboy admiration for Savatage and the projects of the various members. That said, Zakk Stevens’ Circle II Circle has never completely connected with me since the band’s best effort, their debut record Watching in Silence in 2003. Their last outing, 2008’s Delusions of Grandeur, might have done that if it hadn’t been for the awful mix on the record. Their latest effort, Consequence of Power, sounds much better than the previous, but still is a bit flat and dry in places.

Musically, though, there’s a nice mix here. Naturally, with Stevens’ vocals out front and in your face, there will be comparisons to Savatage, and as with past Circle II Circle efforts, there’s much of his old band. But he offers up some variety, too.
One of the better examples being the third track, the 1970s hard rock inspired “Out of Nowhere,” that features some crunchy riffing from Andy Lee and a nice driving bass groove from Paul Michael Stewart. It also has one of the most balanced mixes on the record. In fact, Stewart turns in some pretty impressive performances on this record, but they’re often kind of buried in the background, along with drummer Johnny Osborn. A good example is “Remember,” which puts a killer riff by Lee and Stevens’ vocals out front, but there’s a nice pounding performance by Osborn and Stewart on the verse that doesn’t have quite the impact that it should. That aside, the track is still one of the best cuts on the record.

“Symptoms of Fate” is another interesting track with an almost funky riff by Lee leading the song off before it settles into a verse more reminiscent of Savatage. “Mirage” brings in a thrashing guitar riff from Lee and brings a new kind of energy to the band and the record. Savatage comparisons will certainly be made with “Episodes of Mania,” which delivers a guitar riff reminiscent of some of that band’s early work, prior to Stevens’ arrival. It’s one of my favorite songs here for that very reason, though. I also like the down and dirty grooving riffs of “Take Back Yesterday.”

Despite the loss of guitarist Evan Christopher, the guitars on this record are among the best on any Circle II Circle effort. Lee, who has been with the band since 2003, picks up the slack from the loss of a second guitarist and proves himself a master of the riff. Stevens’ vocals are spot-on, as usual, and the rhythm section is tight with long-time member Stewart and new drummer Osborn, even if they are often a little too quiet.

Consequence of Power is probably Circle II Circle’s best effort from a musical standpoint since their debut, but I really wish they could get the production together. Every record they’ve put out seems to be plagued by some weakness in that area, and this one is no different. While better than Delusions of Grandeur, the mix is still a little flat and makes the music seem disconnected in places. A more dynamic and powerful mix would have made this record easily one of my top 10 for the year. Instead, it’s still a really good record, but leaves me wishing it reached the level that it could have