Review: Goatwhore, "Carving Out the Eyes of God" 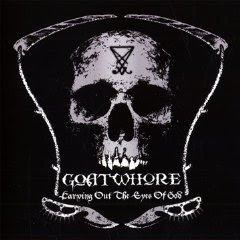 Even though they're from my own back yard in New Orleans, I wrote off Goatwhore for a long time without hearing them. My interests in black and death metal are limited, and I've never really been drawn to those bands that try to outdo each other with disgusting names (Goatwhore, on the whole, being on the milder end of that lot). I find that sort of thing pretty silly, and I have to admit that I ignored them based on the name alone. I thought I knew what it sounded like. I'm big enough to admit when I'm wrong and, on this one, I was wrong.

The first hint that I'd made a mistake came with their last record, 2006's "A Haunting Curse." When I'm listening to XM or watching Headbanger's Ball, I try to make it a point to give everything a chance. So, one Saturday night, the video for "Alchemy of the Black Sun Cult" came on, and much to my surprise, I thought it was actually pretty good. It led me to check out that record, and I found it quite enjoyable -- so much so, that I sought out their latest record "Carving Out the Eyes of God," and I like this one even better.

The black metal roots of the band still show through on nearly every song on this record, but there's also a very strong thrash presence alongside some old school death metal. What most impresses me with "Carving Out the Eyes of God" are the strong melodies -- something often lacking in the more extreme subgenres. The compositions here are more linear, from the black metal mode, and definitely not the standard verse-chorus-verse with a big hook. In fact, there's not any real semblance of a hook at all. That's normally a turn-off for me, but the songs are just rock solid, greatly varied and heavy as hell.

With my background in classic thrash, it's not surprising that I gravitate more toward the songs on that end of the spectrum. The record opens with a great one in "Apocalyptic Havoc" that brings plenty of energy and sets the right tone. Other favorites are "This Passing into the Power of Demons" (yes, they follow the black metal formula for convoluted song names) and "Razor Flesh Devoured," which are practically straight thrashers.

Black metal fans should still find plenty to like in the title track and the bashing opening of "In Legions, I Am Wars of Wrath." There's some blast-beat chaos at the beginning of "The All-Destroying" before it settles into a more melodic mode, and the hammering rhythm after the first verse of "Shadow of a Rising Knife" is hard to ignore. Death metal passages color several of the songs, including the aforementioned "In Legions...," and there's even a punkish hardcore touch on the riffs of "Reckoning of the Soul Made Godless." It's a nice mix of some of the best that all of the extreme genres have to offer, and Goatwhore blends it well.

The true star of the record, though, is perhaps the final track, "To Mourn and Forever Wander Through Forgotten Doorways." It's easily the softest moment, but it's still an absolute monster of a song. Vocalist Ben Falgoust delivers the lyrics in a raspy, almost spoken-word type delivery that's usually not my thing, but for some reason, I really like it.

Guitarist Sammy Duet provides some fantastic riffing that keeps the album interesting throughout. I particularly like the huge heavy riff that opens "Provoking the Ritual of Death." Surprisingly, the vocals are also a highlight for me. Monotonous vocals are one of the things I dislike about much extreme metal, but no worries here. Falgoust's delivery is appropriately abrasive and aggressive, yet still distinctive and memorable. The same could be said of the record as a whole. Basically, if you don't like the part of the song that's playing right now, just hang around for a second. Something new is coming and you'll probably like it.

So what's the valuable lesson we've learned here? One I should have learned long ago. Never judge a book by its cover or a band by its name. Will I be sporting the Goatwhore T-shirt anytime soon? Not likely. But I will be looking forward to more music from them, and that is, after all, what really matters.

Get "Carving Out the Eyes of God."