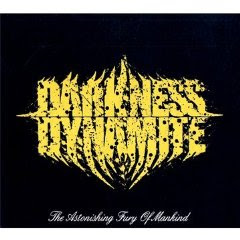 I’ve heard of saving the best for last, but on a record, it’s not usually the best idea. That’s unfortunately what Darkness Dynamite have done on "The Astonishing Fury of Mankind," though.

After nine tracks of OK but fairly uninventive metalcore, the last two songs on the album finally show show sparks of life and make you wish that the rest of the album showed some of the same variety. “The Everlasting Grace of Mind” offers the first real sign of life on the record. The quietest piece here, it opens with some electronic noise and a light acoustic guitar that puts the listener in mind of Pink Floyd. It’s also probably the strongest number here. That leads into the title track, which closes the album. The song opens again in a quiet mode, very dark, building slowly to a Zakk Wylde-style guitar riff. Vocalist Junior Rodriguez takes on more of a black metal approach in the opening verses. It does, of course, revert back to some standard metalcore stylings, but there are some darker, melodic bits sprinkled throughout that remind me of God Forbid’s better stuff.

After a fairly generic start in “Supernatural,” which blends a bouncy rhythm with a commercial rock-flavored chorus, there are a few things to recommend the album. The angular opening riff of “Hell Eve Hate” puts me in mind of Helmet. There’s a nice opening guitar riff on “$15″ before the metalcore kicks in. “Chasing Inside” has an interesting minimalist opening with Rodriguez roaring the first lines, and “By My Own” is one of the few songs outside of the last two that I might return to on this record. It has a catchy opening and reminds me a bit of Sepultura’s cover of New Model Army’s “The Hunt.”

The big problem here (other than the band name reminding me of 1980s hair band Kix’s “Midnight Dynamite”) is that interesting moments are few and far between and overpowered by the standard metalcore sound that we’ve heard thousands of time. At this point, it’s incredibly stale.

If you still can’t get enough metalcore, then Darkness Dynamite is probably worth a spin for you. Unfortunately, most of us — even those who originally liked it – have had just about all we can take at this point.


Get "The Astonishing Fury of Mankind."