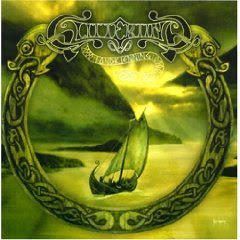 I’ve admitted before that I’m a sing-along sort of guy, and I sometimes have a problem with records that are not in English for that reason. On the other hand, I can’t complain about weak lyrics when I don’t understand any of them. So maybe it all comes out in the wash.

So, I’m faced with the latest from Norwegian folk metal outfit Glittertind, Glittering Tine in English. "Landkjenning," which translates to "Landing," "Landfall" or "Landsighting" in English depending on where you look it up, is a bit of a concept album that revolves around Norwegian poetry and history. It covers the years of Norway’s Christianization and the conflict between the new religion and the old ways. I’m taking the word of the press notes that came with the record on that. Perhaps some of our Norwegian brethren will straighten it out if that’s not the case.

Anyway, on to the important part - the music. And it’s quite an interesting mix, ranging from straight-on folk to metal to some really fun numbers. Chief among the latter tracks is the only one sung in English, “Longships and Mead.” The accordion-driven number is actually a little out of place after the more somber mood of the first three tracks, sounding more like the pirate sounds of Alestorm. It would be a great drinking song, though, and it serves as a bit of a turning point in the record as much of the rest of the record falls more into Korpiklaani or Alestorm territory. “Varder in Brann” continues the more upbeat sound with an entertaining reel. “Jeg Snorer Min Sekk” has an almost pop-punk feel, only with a flute riff in the middle.

Toward the end, things turn back toward the more somber with the soft “Mot Myrke Vetteren.” Not quite as good as the ballad “Gar Min Eigen Veg” that came earlier on the record, it still brings the reflective feel of the earlier part of the record back. “Brede Seil Over Nordsjo Gar” returns to the march-like sounds that opened the record with the title track, and the record closes on a very traditional note with the organ-heavy instrumental “Overmate Full Av Nade.”

Perhaps the darker, more serious songs at the beginning and end are meant to reflect the more rigid Christianity, while the lighter, more carefree side reflects the previous pagan ways. I like the idea that the record was arranged that way, and I’ll go with it unless someone fluent in Norwegian corrects me on the assumption.

All in all, I find "Landkjenning" a quite entertaining record despite my inability to grasp what most of the songs are truly about. I will admit to preferring the middle section of the record, which is much more light-hearted and great fun. It’s the kind of stuff that I’d like to clink a pint of mead to, and those songs lead me to give "Landkjenning" a hearty recommendation to fans of Alestorm and Korpiklaani.

Posted by Fred Phillips at 3:52 PM