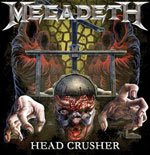 So I've had a day to digest the first song from Megadeth's upcoming record, and there's always a slight holding of my breath as I wait to see which Dave Mustaine showed up this time. Fortunately, at least on this track, it was the old familiar Dave.
"Head Crusher," despite being a bit unimaginative in the title and lyrics department, is a solid old-school Megadeth tune. It's aggressive, featuring shades of "Wake Up Dead" from the classic "Peace Sells" record, while also taking cues from the last 'Deth record, "United Abominations." That's a good thing as far as I'm concerned, since I consider that their comeback record. (I know most people consider it to be "The System Has Failed," but I really don't care for that record.)
So, it's only one song, but it's pretty much what you want from Megadeth. It opens with a fast riff and some lead wailing from Mustaine, has some slower, chunkier riffs in the middle, a decent melody and some screaming leads. It's a good taste of the new record. Hopefully it's representative of what we can expect from the rest of the record.
If you haven't heard "Head Crusher" yet, it's streaming at Roadrunner Records. Check it out for yourself.
Posted by Fred Phillips at 6:43 PM