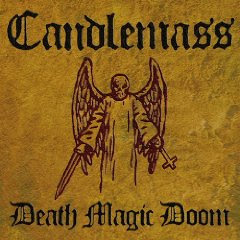 Candlemass impressed me with its last release, "King of the Grey Islands," the first with vocalist Robert Lowe of Solitude Aeturnus. It ended up high on my top 10 list of 2007, so I was naturally looking forward to their new release, "Death, Magic, Doom." It doesn't disappoint.

If you're familiar with Candlemass, you won't find much surprising here. The record opens with one of its strongest performances, "If I Ever Die," an uptempo number with a memorable hook. Like a couple of numbers on "King of the Grey Islands" it showcases Lowe's vocals in a blend of traditional and near-power metal. From there, the record settles back into the heavily Sabbath-influenced doom and gloom riffs that fans expect. "Hammer of Doom," at times, echoes "Black Sabbath" with it's slow, bell-like guitar riff and "Demon of the Deep" offers up a slab of a riff that Tony Iommi himself would be proud of.

As on the last record, the band manages to find a nice middle ground. There are the heavy, plodding numbers like "Hammer of Doom" and "Clouds of Dementia," with some faster, more power metal-tinged numbers mixed in. I find myself being drawn more to the faster numbers, which seem to offer a little more originality. "Dead Angel" opens with an almost thrash riff before settling into an exotic hook that's one of the better moments on the record. Likewise, album closer "My Funeral Dreams" impresses with a dark opening that provides one of Lowe's best vocal moments before opening up into a really good grooving melody. "The Bleeding Baroness," in its faster moments, offers a melodic nod to Mercyful Fate that's also most welcome.

Guitarists Mats Bjorkman and Lars Johansson provide their usual workman-like performances, offering up huge, heavy riffs and some interesting leads. While some long-time fans may still be disappointed at the departure of singer Messiah Marcolin, to my ears, Lowe remains the best vocalist the band has ever had. He manages the sinister tones of Marcolin without the camp. While the vocal melodies do, at times, become slightly similar sounding, especially on the slower passages, there are some truly shining moments that should impress even the most hardcore Marcolin fan.

The record does suffer from a slight case of bad timing, however, coming so near the release of the new record from Heaven and Hell (the all-time ultimate purveyors of doom), but it manages to hold its own. I'm not sure that its as energetic as "King of the Grey Islands," and long-time fans, of course, will bemoan the fact that it's not as powerful as the band's iconic records from the late 1980s, but it's a solid addition to the Candlemass catalog. The comeback that started with the self-titled record in 2005 is still going strong.

Posted by Fred Phillips at 5:23 PM