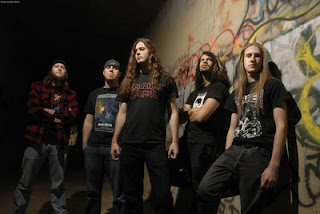 The new Warbringer album, Waking Into Nightmares, is set for a May 19 release, and the group recently completed a new video for the track, “Severed Reality,” which was shot by David Brodsky (Black Dahlia Murder, GWAR). This is a frenetic, performance based clip that perfectly captures the band’s live stage show. The video can now be viewed exclusively at www.myspace.com/warbringer.

John Kevill (vocals) comments: “The video for ‘Severed Reality’ got done in the middle of a tour, and it was done mostly live at the venue we were playing at that night in Milwaukee. We did a couple shots on the stage before anyone showed up, and then just shot the whole show for the video. As it turns out the show was fucking insane, we couldn't even fit all the stage divers in the video! David Brodsky went to put the whole thing together and it came out great, I think it is the strongest video we have had so far.”