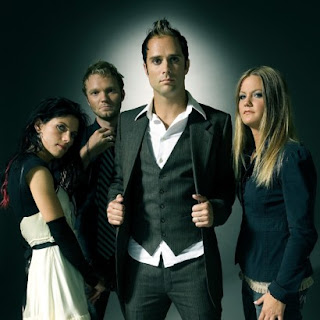 After 12 years of work, the members of Skillet may have been wondering if they had the right recipe when they released "Comatose" in 2006. Little did they know that record would turn up the heat and, three years later, they’d still be riding the wave.

"You just never know," said singer and bassist John Cooper. "We’re thrilled about it. It has been sort of unexpected because we’ve been doing this for a long time. We’ve done six studio records and spent 12 years on the road. In some ways, you never think you’re going to have a big break after 12 years."

But "Comatose" gave them that break. The record is approaching gold, produced five back-to-back No. 1 Christian rock hits, earned them the 2008 GMA Dove Award for Rock Song of the Year and gave them their first Grammy nomination. In 2008, the tour for the record spawned a live album and DVD, "Comatose Comes Alive."

"Our fans had been bugging us for years to do a live project," Cooper said. "We thought it would be really cool, but I wanted to make sure it was going to be done well. It had come up once or twice before, but I never felt like we had the budget to do it. Then, the label said, ‘we’re going to do a live DVD next week.’"

Given only a short time to prepare for the shoot, Cooper is still quite happy with the way it turned out.

"We were already on tour, so we didn’t have to do anything special," he said. "We got really talented people to work on it, and I’m very pleased."

Skillet just wrapped production on the follow-up to "Comatose." Titled "Awake," Cooper expects it to hit shelves in August. He knows the expectations that may be placed on the record, and he felt that pressure writing it.

"There was pressure like I’ve never experienced before in my life," Cooper said. "Every time you do a record, there’s pressure because you want to outdo the last record. This time it was intensified because the last project was so successful."

Cooper wrote more than 40 songs for the album before whittling it down, and said that, while it has a lot of similarities to "Comatose," it won’t be a remake of that record.

"It has songs that I call the ‘Skillet sound’ -- with strings and hard guitars, but we did try a few new things," Cooper said. "Overall it has a bit more of a hard rock sound to it. It’s not a departure by any means, but we put a few new twists in there."

Fans are already getting a chance to hear some of the new material on the current tour, and they’re already singing along thanks to the power of the Internet.

"The first night we ever played the new songs, they were on YouTube with fans already watching them and commenting on them," Cooper said with a laugh. "It was amazing. It was a shock to me."

While Cooper admits the Web does have its down side when it comes to illegal downloads, he also embraces the interaction with fans.

"You have a new record coming out, and fans are watching and waiting to see what’s going to happen," he said. "You can do a lot of grass roots promotion, and you’re not so disconnected from your fans."

Cooper’s also pleased with the package on this tour, which includes long-time friends Decyfer Down and one of Cooper’s favorite Christian rock acts, Disciple. Cooper thinks fans will be entertained, and he hopes they leave with a message.

"My philosophy is let’s get in and have the biggest, most exciting rock show we can have and have a positive influence on people," he said. "We’d like for everyone to leave feeling hopeful. We want you to leave having a good time, having a reason to live, and if you don’t feel like you have a reason to live, we want you to know that we believe Jesus is the answer. He’s there for you, and He loves you the way you are."
Posted by Fred Phillips at 1:25 AM