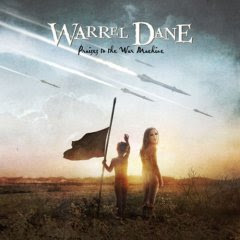 When you play in a group of extremely talented musicians who are all trying to grab their piece of the spotlight, it’s no surprise that, at some point, you’d want to do your own record and put yourself in the spotlight. Already considered one of the best vocalists in metal, Warrel Dane now indulges his own tastes a bit to showcase that voice outside the confines of Nevermore. He’s recruited ex-Soilworkers Peter Wichers (who also recorded and mixed the record) and Dirk Verbeuren and Matt Wicklund, formerly of Himsa, to back him on a record that, while not alien-sounding to Nevermore fans, allows Dane to stretch his horizons.

It’s an easy and obvious comparison, but Praises to the War Machine is somewhat similar to a Bruce Dickinson solo record, in that it’s a record that allows Dane to be the star of the show without having to share time with other band members. Like Dickinson’s records, in some ways this one is almost superior to Nevermore. There’s certainly a bigger focus here on song structures and songwriting than technicality. Not every song needs a blast of virtuosic performance, not even from Dane himself. It also gives Dane a chance to show more of his range from the warbling vocals Nevermore fans are familiar with to some nice lower register work which is surprising in spots.

The record is, at times, a bit indulgent, but that’s really the point of a solo record. There are certainly things you’d never hear on a Nevermore record, like a fairly faithful cover of the Sisters of Mercy’s “Lucretia My Reflection” - one of the highlights of the record - or the melancholy, almost gothic “Your Chosen Misery” or the sort of bluesy feel of the opening of “This Old Man,” both of which showcase a lower, more subdued side of Dane than we’re used to hearing. Many of the slower songs here are a bit morose and there seems to be an obsession lyrically with the death of a family member that runs through several of the songs. Even the slower songs provide some moments of undeniable power, though, like the soaring chorus of “Brother.”

There’s also a conscious effort here to not alienate fans of Nevermore, as evidenced by opening tracks “When We Pray” and “Messenger” (featuring Jeff Loomis on guitar), neither of which would cause fans to bat an eye if they appeared on his regular band’s next record. Perhaps the most surprising moment on the record is an unexpectedly heavy, very Nevermore-ish cover of Paul Simon’s “Patterns,” which is another highlight of the record. He closes with a bang, delivering the pounding, crunching sound of his main band on “Equilibrium.”

Praises to the War Machine is not a huge departure from what we’ve heard Dane do before. While it gives him a chance to show some things we don’t normally hear in his regular gig, the music here is more like Nevermore than unlike. The big difference is that it’s arranged to showcase the vocals and, yes, deliver up perhaps a few more accessible moments to those who aren’t obsessed with virtuosic performances. It’s hard to get choruses like the one from “The Day the Rats Went to War” (which brings in the title of the record) out of your head, and maybe the songs here are, at times, a bit catchier than the average Nevermore fare. But fans of the band won’t be disappointed, nor will fans of great melodic metal in general. This one’s easily a top 10 release for the year.

Get "Praises to the War Machine."

Posted by Fred Phillips at 7:56 PM