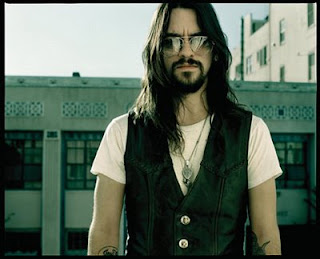 Fans of Shooter Jennings probably noticed a slightly different attitude when his latest release, "The Wolf," hit stores. While there were still rockers like record opener "This Ol' Wheel" and "Higher," the record has a decidedly more country flavor than his previous efforts.

"We wanted to use a lot of those traditional instruments and do some really wild stuff with it," Jennings said. "I feel like it is more of a country record. It's not necessarily defining what my next direction is going to be or anything like that, but it's a storytelling record to some degree, so we wanted to keep it as rootsy as possible."

Though this record is his most country outing, when he's at home or on the bus, Jennings is as likely to have Sabbath on the stereo as George Strait, particularly the band's sixth record, "Sabotage." He's even incorporated the riff from the band's "Sweet Leaf" into a song from his first record, "Busted in Baylor County," and has been known to play more of the song live.

"I really do love George Strait's music, but if you don't listen to Sabbath, you're not going to totally get me altogether," Jennings said. "If you haven't put on 'Sabotage' before and listened to it from head to toe at least once in your life, you're probably not going to get the whole picture of my music."

So fans shouldn't worry, he said. Jennings is not giving up the rock.

It's an attitude that, perhaps, has cost him some traditionalist fans of country, who aren't crazy about the rap-like vocal he delivers on "This Ol' Wheel" or the rock 'n' roll lifestyle that he often sings about.

It's a testament to Jennings' crossover appeal that he was recently asked to play both on Charlie Daniels' Volunteer Jam tour and a few dates on Rage Against the Machine/Audioslave guitarist Tom Morello's Justice Tour. He's been equally accepted by both crowds, and that mix of fans is what he's after — people who can appreciate both rock and country.

"That's kind of my point," he said. "It makes me feel accomplished to do that."

He's also making a habit of playing with Louisiana artists. On his last record, "Electric Rodeo," Tony Joe White made a guest appearance. This time around, it's legendary fiddle player Doug Kershaw guesting on "This Ol' Wheel." The pairing came completely by accident. Jennings had gone to a guitar store in Los Angeles to buy a 12-string guitar for one of the songs on the album. The guy who sold him the guitar was Kershaw's nephew and played with Kershaw's son in a band.

"That was such a funny situation," Jennings said. "He said, 'hey, if you want any fiddle, my uncle is Doug Kershaw, he'll do it.' So I gave him my number, and like an hour later, he called. We flew him down there, and he cut the track and really killed it, and we had a great time with him."

"The Wolf" features a wide mix of sounds from a cover of Dire Straits' "Walk of Life," which Jennings says was a random decision after hearing it on the radio one day, to very traditional country. There's also perhaps a bit more of his legendary father, Waylon Jennings, on songs like "Old Friend," "Time Management 101" and particularly "Concrete Cowboys." He takes comparisons to his father as a great compliment.

"It's kind of a ballad of a modern-day drifter," Jennings said. "I feel like the instrumentation on it was really simple and raw, and that's what we wanted to do. The melody on it is really like my dad's or Willie's or something like that. He's always with me. He was very influential in my life, a good friend of mine, a hero of mine. I couldn't deny that to anyone."
Posted by Fred Phillips at 5:44 PM