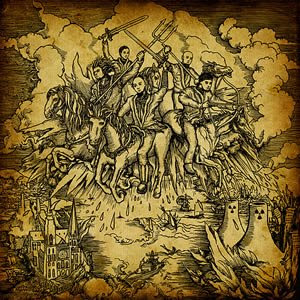 Kiuas' 2005 release, "The Spirit of Ukko," was one of those records that I dream of finding in a stack of CDs by bands that I’ve never heard of before. A mix of power, death, thrash and folk metal, it was one of those rare albums that I can honestly say sounded like nothing else out there. The follow-up, "Reformation," toned down the death influences playing up the thrash and folk. It was a great record, but didn’t quite match "The Spirit of Ukko." Their newest release "The New Dark Age" works to find a balance between the two, and may well be their best.Thrash and power are still at the forefront here, but the death metal elements make a bigger return than on "Reformation." The riffs are great, the melodies memorable and the huge anthemic choruses make great sing-along fodder for the wannabe chest-beating metal warrior in us all. It’s a definite top 10 selection at the end of the year.

The heart and soul of this album is a trio of songs, appropriately, in the middle of the record. It starts with the title track, opening with an old school death metal stomp riff opens the track followed by a soaring series of sweeps by guitarist Mikko Salovaara. It settles firmly into thrash territory after that with one of those big chorus melodies that gets the blood pumping. Throw in a couple of brief blasts of the original deathish riff and a growl or two scattered throughout the song, and it may be the strongest effort here, but it’s got competition. Next up is “To Excel and Ascend,” opening with a slightly exotic classical guitar lick and some folky, almost tribal drums. A thrash-power hybrid riff follows with the first real deathly vocal growls on the record that lead into certainly the most memorable chorus melody on the record. It brings a little groove to the record. The third song in this triumvirate, also starts with a surprising classical piano run. “Black Rose Withered” is a straight-up galloping thrasher that, lyrically, revisits The "Spirit of Ukko" tune “Thorns of a Black Rose.”

While those three songs are definitely the strong points of the record, "The New Dark Age" doesn’t really have a weak point. All of the songs are incredibly solid. They deliver up some folky leanings with the acoustic track “After the Storm,” which features a female vocalist (unidentified in any information on the record that I could find.) It has a heavy Fleetwood Mac feel with the harmonized male and female vocals, but that’s not a bad thing at all. “The Wanderer’s Lamentation” follows that same track with some nice acoustic guitar work under the verse before a big power metal crescendo kicks in. “Conqueror” has a soaring chorus that the power metal fans will appreciate. “Of Sacrifice, Loss and Reward” should appeal to melodic death fans. You get the picture. There really is something that most metal fans can appreciate here.

The band features a group of versatile musicians and everything is solidly played here. Salovaara provides great riffs and leads, Markku Naraneva pounds the skins with a vengeance and Atte Tanskanen provides some tasteful atmospheric keyboards that are never overbearing. Without a doubt, though, one of the biggest strengths, if not the biggest, of Kiuas is vocalist Ilja Jalkanen. He’s got a powerful, versatile voice with force and balls. No wimpy power metal vocals here. Of course, if their Web site is to be believed he’s got a powerful ego to go with it, but the dude can sing.

I’ve only got one question about this record. Why am I still having to order these guys as an import? Someone please get them a U.S. release.