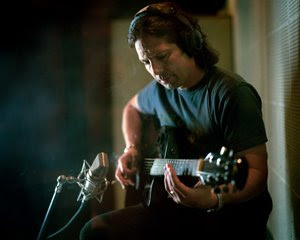 When it comes to rock resumés, guitarist Al Pitrelli's is pretty impressive. He's played with shock rock king Alice Cooper, thrash titans Megadeth and power metal masters Savatage. So what's he doing in a tuxedo on a classical Christmas tour playing to crowds that range from young children to senior citizens? Even he's not sure.

It started back in 1995, when he was hired to play on Savatage's "Dead Winter Dead" record, a concept album about the war in Bosnia that featured the song "Christmas Eve (Sarajevo 12/24)," a blend of rock, classical and "The Carol of the Bells."

The song was a surprise hit on rock radio during the holiday season, and it wasn't long before O'Neill, Savatage founder Jon Oliva, Pitrelli and Robert Kinkel were working on a full project in the same vein, mixing rock, classical and traditional Christmas music. The result, "Christmas Eve and Other Stories," was released in 1996. Even then, Pitrelli wasn't convinced.

"I said, `Nobody will buy it but your mother and mine, but we'll have a whole lot of fun recording it,'" he said with a laugh. "Lo and behold, we're here, nine years later, and I can't believe what it's grown into. I'm so proud of it."

Trans-Siberian Orchestra started touring for the holidays in 1999, and now, due to demand and the time constraints of the holiday season, it's grown into two full tours - one for the eastern half of the United States and a second for the western half.

For the first half of the concert, TSO plays "Christmas Eve and Other Stories" and for the second half, they mix things up with numbers off their other albums and even a few surprises.

"We're all just a bunch of barroom rock `n' rollers from back in the day, so we'll always pull out a cover tune or two and just have some fun," Pitrelli said. "It's a long show, and we'll cover a lot of ground over the course of two and a half hours."

And there's also a stage spectacle for audiences to enjoy, with plenty of lights, fire and smoke pulled from the band's rock roots.

"It will be bigger than last year, but not as big as next year," Pitrelli joked about the stage show. "That's the Paul O'Neill way of doing things."

Pitrelli also sees the tour as a way to break the stereotypes that surround musicians - the stiff-necked classical musician and the primadonna rocker. He admits that it gets challenging at times to get rockers and classical musicians on the same page, but in the end, they find a lot of common ground.

"What we try to do is dispel the clichés," he said. "The six or seven rockers in the TSO band are very well-educated musicians with a wide vocabulary, and the string section that we have, I think they're all closet headbangers."

But what would some of the older members of the audience think if they knew the guy directing this classical Christmas show played with Alice Cooper?

"You'd be surprised how many of those 70-year-old grandmothers are wearing Alice Cooper T-shirts under their sweaters," he joked. "I don't think music has a demographic age-wise anymore. When you look out in the audience, there are 80-year-old women who are just banging their heads, and there are 8- or 9-year-old kids listening closely to the poetry and ballads. You never know, good music is good music."

Still, he admits his resumé does occasionally raise some eyebrows.

"When some of the older folks hear about Megadeth, they say `oh, my,' but we play with them a little bit and have some fun," Pitrelli said. "We're light-hearted about it, and we poke fun at ourselves. By the end of the evening, everybody gets it, and we keep them in on the joke so to speak."

The annual holiday tour keeps growing, and Pitrelli admits that he would like to see Trans-Siberian Orchestra last beyond the musicians involved.

"As a musician, one of the things that you dream about is that your music lives a lot longer than you do," he said. "To be part of someone's Christmas tradition long after I'm gone, yeah, I'd be real proud to know that was happening."
Posted by Fred Phillips at 11:39 PM