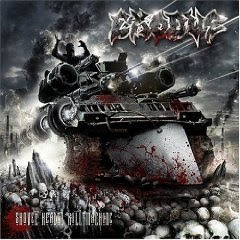 Ah, now this is more like it. A lot of my old thrash-loving friends went crazy with last year's release of "Tempo of the Damned." I just couldn't get into it the way they did. The sound was there, but I didn't hear the energy of Exodus. I definitely hear it on this album.

Before anyone points it out, I realize that it's hard to really consider this an Exodus record. It's basically Gary Holt and four other guys at this point. But based on what I'm hearing, maybe fresh blood is what was needed. The most obvious change, of course, will be new vocalist Rob Dukes, who replaces Steve "Zetro" Souza. Correction, who blows away Steve "Zetro" Souza. I grew up on Exodus with Souza vocals (I was a latecomer to the band), but Dukes offers a voice that can easily pull off Souza and Paul Baloff vocals, but has a little more rage in it. Of course, no one was concerned about Paul Bostaph taking over the drums. We all know what he's capable of. The third lineup change, Lee Altus, provides a seamless complement to Holt's guitar work. I was a little bummed at the loss of Rick Hunolt, but Altus fills in nicely.

Now, to the music. It kicks you in the head from the first song and never lets up. I popped the CD in, and before I was a minute into the first song, "Raze," I was already grooving. It remains one of my favorites on the album, possibly because I can visualize my office when Dukes rages "Light this motherfucker like a roman candle, burn this bitch straight to the ground." (Note to any overzealous law enforcement types who might be reading: It's called releasing frustration. I have no plans to burn my office. I need the job). Personal feelings aside, this is a beautiful, blazing thrasher to get the album going. It lets you know upfront what's to come.

Clocking in at over eight minutes, "Deathamphetamine" offers up a slab of pure, unadulterated Exodus, a sound from the glory days of the band. The same goes for most of the songs on the album. If "44 Magnum Opus" doesn't get your blood pumping, then you should probably go to your nearest funeral home and make arrangements. Easily one of the strongest songs on the album is "Going, Going, Gone," which adds the hooks of "Fabulous Disaster" into the mix. In fact, the whole album reminds me a great deal of a cross between "Fabulous Disaster" and "Pleasures of the Flesh." It's got a nice mix of the hooks and the faster, more aggressive early sound of the band.

The only place that the band misses on this album is by occasionally focusing on tired subject matter, see pedophile priests in "Altered Boy." But when the music is this solid, who cares what the songs are about?

Go get this album. It's a true thrashterpiece, the likes of which we haven't heard in a while.

Get "Shovel-Headed Kill Machine."
Posted by Fred Phillips at 5:47 PM