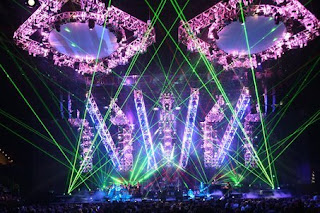 Even if you hate Christmas and Christmas music worse than Ebenezer Scrooge, you should still catch Trans-Siberian Orchestra, just for the sheer spectacle of their live show. And if you have an appreciation for outstanding musicianship, there's twice as much reason to catch the band's annual holiday tour.

Though the flash is what catches your eye, the true beauty of the TSO show is in the musicianship. I've rarely heard a rock band play more note-perfect renditions of their songs in the live setting, and though the original group is split in two for the two legs of the tour, they've stocked the bands with outstanding musicians.

I caught the western version at the CenturyTel Center in Bossier City with the incredible dual guitar attack of Al Pitrelli and Angus Clark and the string work of Anna Phoebe. Phoebe's performance, was, I believe, the first time I've ever seen such a roar from a rock crowd after a violin solo. And, of course, it goes without saying that there were remarkable vocal moments from Michael Lanning, Guy LeMonnier and Jill Gioia.

The band opened the show with a run-through of the first album, "Christmas Eve and Other Stories." Though a few bits were dropped, probably due to the personnel required to perform them, the show hit all of the high points, including "First Snow," "A Mad Russian's Christmas" and of course, the song that brought the house down, "Christmas Eve Sarajevo 12/24."

The second set was a bit more of a laid-back production. The band members took some time to have a little fun with the crowd. Also impressive here was the great spontaneous crowd interaction, and the lively crowd helped. Trans-Siberian Orchestra ran through songs from "The Lost Christmas Eve," "Beethoven's Last Night" and even jammed out a cover of Led Zeppelin's "Rock and Roll."

High points of the second set were the band's version of Carl Orff's "Carmina," scheduled to appear on their forthcoming non-Christmas album "Night Castle," and an absolutely stunning version of Beethoven's Fifth Symphony, complete with sparklers, fire blasts on the big familiar notes and the same impressive laser show that accompanied most of the evening.

The show closed with a memorable keyboard battle between Jane Pitrelli and Carmine Giglio (and that's saying something considering my usual disdain for keyboard.) The battle culminated in a performance of the theme song from "Peanuts" leading into "Wish Liszt" from "The Lost Christmas Eve" and finally a reprise of "Christmas Eve Sarajevo" with Clark and Phoebe circulating through the crowd, ending up ... well, I can't give away all the surprises, can I?

Almost as interesting as the show was the crowd. There were long-haired guys in Savatage and Megadeth T-shirts rubbing elbows with perfectly groomed senior couples in suits and party dresses - that's something you don't see everyday. It's actually a little funny to see a grandmother bobbing her head to what is, essentially, Savatage with a string section and a huge production budget. But it's kind of cool, too.

This was my first TSO show, and I was so impressed that I'm making plans to see the band again before Christmas and to travel wherever I have to in order to catch the show next year. I've seen a lot of concerts, and a lot of great concerts. Simply put, Trans-Siberian Orchestra is one of the most incredible shows I've ever seen.
Posted by Fred Phillips at 11:36 PM