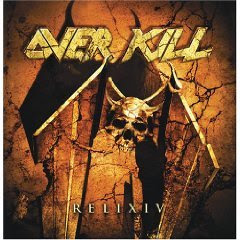 In the 1980s thrash scene, you had the "big four" - Metallica, Megadeth, Slayer and Anthrax - and you had a ton of smaller bands that were also pretty good, but didn't get the press. One of those was Overkill.

Unlike some of the others, Overkill has survived, and even thrived over the years. Their 1999 album "Necroshine" was perhaps the best of their career, putting the focus on big riffs and memorable hooks instead of the raw speed and aggression of their early albums.

On "ReliXIV," the band tries to serve both masters, with some success. While some of the speedsters like "A Pound of Flesh" fall flat, old school thrashers like "Keeper" show the band locked into its groove. While other thrash bands tried to evolve into something else over the years, the members of Overkill, like Slayer, know what they do well and they deliver every time. The strongest songs on the album, "Loaded Rack" and "Bats in the Belfry," provide a blueprint for what thrash should be.

But the band also takes the chance to have some fun on the campy "Old School," which sounds like a cross between Motorhead and the Ramones. I defy anyone to listen to this song twice and not get it stuck in their head.

As usual, Overkill doesn't deliver anything new, but they also don't disappoint fans of classic thrash. All I can say is, "Here's to the old school/didn't matter if you looked cool..."