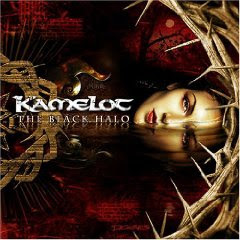 In the power metal genre, there are few bands that have been as consistent as Kamelot over the course of the past 10 years. They entered the scene with a solid debut, "Eternity," in 1995, but they became one of the top bands on the scene with the addition of vocalist Roy Khan for 1998’s "Siege Perilous." Since then, each album has been better than the one before it, and that’s something I don’t say about too many bands.

"The Black Halo" continues their adaptation of Johann Wolfgang von Goethe’s "Faustus," which began on their last release, 2003’s "Epica." On this album, the story takes a darker turn, and so does Kamelot’s music. The mood hits immediately on the opening track “March of Mephisto,” which features the snarls of Dimmu Borgir vocalist Shagrath, who appropriately provides the voice of Mephisto. Stratovarius keyboard player Jens Johansson also lends his talents to the track in the form of some ethereal Rush-like synth work. Other guests on the album include Simone Simons of Epica and Mari of Masqueraid.

Unlike so many power metal bands, Kamelot is not obsessed with speed. If they need the speed, it’s there, as you can hear on tracks like “When the Lights are Down” and “Nothing Ever Dies,” but those are really the only two tracks on the album that you’d consider traditional power metal. The rest are a combination of more traditional melodic metal and prog stylings. In fact, the middle portion of the album rarely gets above mid-tempo, beginning with the moody “The Haunting (Somewhere in Time)” and continuing through the eighth track “Moonlight.” Most striking in this stretch is perhaps the piano ballad “Abandoned,” with its soft orchestration. It’s a very understated performance for a genre known for its bombast.

The album returns to the power metal realms with a huge riff on the title track. But the centerpiece of the album is the epic “Memento Mori,” which finishes the concept, though it’s not the last song on the album. Clocking in at just under nine minutes, it’s the longest song in the history of the band. The track takes the listener on an emotional journey from the bleak, melancholy passages through angry thrashing riffs and finally into resigned acceptance.

The most impressive thing about the album, though, is not the incredible guitar work, the atmospheric keys or the amazing vocals. It’s the sound quality. So often, power metal albums sound thin and reedy, with too much focus on the guitar and vocals and not enough on the music as a whole. Kamelot draws heavily on classical and symphonic sounds, and it shows in the production of "The Black Halo." The album sounds just like a well-mixed and produced symphony with the emphasis all in the right places. Even if you’re not a fan of power metal, this album sounds so damned good it might make you one.

Kamelot may not be one of the most recognized names in the metal world, but when it comes to melodic metal, there are few bands out there right now that do it better.