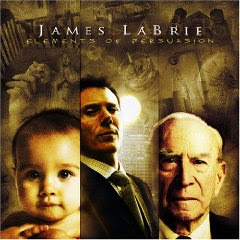 Surprisingly, the first thing you notice about the latest solo album from Dream Theater frontman James LaBrie is not the vocals. In fact, it's the huge guitar riffs of Marco Sfogli.

While the album is LaBrie's opportunity to pursue some things that wouldn't fly in the Dream Theater setting, it's Sfogli who steals the show with chunky riffs that are the stitching for this progressive metal Frankenstein. For a guy who, on his Web site, claims to be influenced by Toto, the Police and (unfortunately I’m not kidding) Winger, Sfogli lays down some pretty solid heavy licks.

As is often the case with solo albums, "Elements of Persuasion" doesn't fall too far from the Dream Theater tree. In general, it's a bit heavier with a bit less emphasis on the prog elements. Think about the heavier parts of a song like "Pull Me Under," and you've got a pretty good idea of the tone of the album. While not exactly Dream Theater-style songs, numbers like the chugging "Freaks" and "Undecided" certainly wouldn't turn anyone's head if they showed up on a Dream Theater album.

But LaBrie has a few tricks up his sleeve, starting with the opening tracks of the album. "Crucify" gets things going with a blast of classic Metallica-style thrash. It’s a good song, though LaBrie’s voice isn’t ideally suited to the style. On the second song, “Alone,” LaBrie veers into a techno-metal romp that, despite the use of drum machines and turntables, will still appeal to fans of Dream Theater’s style of prog metal.

The band even strays from the rock path completely on the fusion-inspired "Lost," which shows off the rhythm section of Mike Mangini and Bryan Beller.

It’s when things slow down that the album falters. Ballads like “Smashed” and “Slightly Out of Reach” drift a little too far into commercial waters for my tastes, with the latter sounding almost like it could come from a Winger album (with better vocals, of course). The slower songs suffer from a serious lack of the album’s strongest element — Sfogli's guitar. Better to skip them and blast “Oblivious” or “Invisible” as loud as the stereo will crank.

What LaBrie does well on this album is tap into the pure rock elements of his main band while scaling back on the artsy parts. He leaves just enough of the progressive sound to please Dream Theater fans, but also opens the door for listeners who are fans of traditional metal. This is an impressive solo effort for LaBrie, who shows that he’s capable of breaking out of his regular band. But when all is said and done, it's Sfogli that you’ll really want to hear more from.

Get "Elements of Persuasion."
Posted by Fred Phillips at 8:22 PM