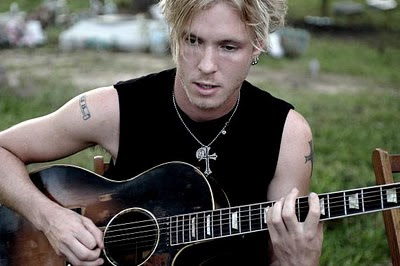 It's been about five years since Shreveport native Kenny Wayne Shepherd released his last album, and when he takes the stage at the Strand Theatre on Friday night to launch his latest album "The Place You're In," fans may be in for a surprise. Shepherd's sporting a new look and a new sound.
The guitarist who made his name by peddling the blues to a younger audience, puts the focus on rock for this outing.
"It's definitely a breath of fresh air," Shepherd said. "After not having a record out for almost five years, to come out with a new sense of musical style, it's probably a good thing."
Shepherd has spent the last few years recharging. He hit the scene with his 1995 debut "Ledbetter Heights" as a 16-year-old phenom, steeped in the style of Stevie Ray Vaughan. The follow-up, 1997's "Trouble Is ..." propelled him to stardom on the strength of the ballad "Blue on Black." The album went multi-platinum and kept him on the road. After touring for his third album "Live On," Shepherd decided it was time to step away for a while.

"I've been working nonstop since I graduated from high school - year after year, 250 shows a year, three albums," he said. "I think it was just time to take a break, sit back, relax and live life at home for a while."

One thing he worked on during the break was honing his vocal chops. On "The Place You're In," Shepherd steps up to the mic for the first time in his career.

"It's something that I think all my fans have been anticipating and that I've been looking forward to doing," he said. "It was just a matter of when I felt comfortable enough to step up and do it."

Shepherd thinks the move also adds even more depth and passion to his music.

"This is a very personal album as far as the lyrics go," he said. "It has a different effect when you're actually the one singing and translating the message to people."

He's not planning to take on the old songs himself, though. Noah Hunt is still part of the band (and sings a couple of songs on the new album).

Another guy who handles vocals on the album is Kid Rock. Shepherd first worked with the rap-rocker on Kid Rock's self-titled 2003 album. Now, Rock returns the favor on the track "Spank."
"It's always a pleasure to work with him," Shepherd said. "We've just kind of run into each other on the road over the years and developed a really good friendship. He called me to play on his record, and I had this song that I thought was well-suited for him. It turned out great."
Shepherd will also have some special guests for Friday's performance, including Jerry Cantrell of Alice in Chains. He's also working on a few other surprises, but can't say anything about them yet.

Even with all this rock talk, Shepherd's not worried about alienating his old fans. He's always had a strong rock influence in his music, and though a few may not like it, he thinks most of the fans will follow him.

"I couldn't make everybody happy with any of my other records, either," he said. "There were still some blues purists out there who criticized me and said I wasn't a blues player. With anything, you're going to anticipate some of that.

"But I expect to gain some new fans as well. That's a good thing because they'll listen to my previous albums and maybe get turned on to the blues in the process."
Posted by Fred Phillips at 7:10 PM