Interview: Tim Roth of Into Eternity 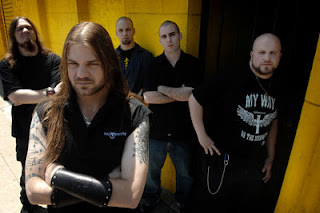 In the more extreme subgenres of metal, fans can be fiery and fickle. Bands that stray from the norm walk a fine line between adulation and anathema. The line has been widened recently by Canada's Into Eternity.

The hybrid band takes elements of the progressive rock of Rush, Dream Theater and Fates Warning, and blends them with the snarling, brutal sound of death metal. It's a mix that band members weren't sure would fly, but they knew it was what they wanted to do.

"When we originally did it, we weren't signed or anything, so we didn't have anything to lose," said vocalist Tim Roth. "We were doing it because that's what we wanted to hear in a band. That's just always how we were going to do it, no matter what."

So far, Into Eternity has been lucky. Their latest album "Dead or Dreaming," which was released in the U.S. last year, has created quite a buzz in the metal community for its marriage of soaring three-part harmonies and ethereal keys with fire-breathing growls and even the occasional blastbeat from drummer Jim Austin.

"People either like it or they don't," Roth said. "But the people who really dig it, they seem to be really hardcore into it, so that's pretty cool."

Into Eternity began with Roth, Austin and bassist Scott Krall in Regina, Saskatchewan, Canada. The area didn't have a lot of opportunities for rock and metal musicians, so the band's task was difficult from the start.

"No bands ever came through our town - it just never happened," Roth said. "We weren't influenced like if we were living in L.A. and saw wicked metal bands everyday, but I guess that kind of worked for us."

Instead of working their way up through a club scene, Into Eternity self-financed their debut album and bombarded record labels and rock radio stations with it. Roth says there was a lot of interest, but no one was willing to offer a contract. Eventually, they signed with DVS Records in Holland to produce "Dead or Dreaming" and spent time building a fan base in Europe. When they returned home to Canada, Century Media signed them to a five album deal and released "Dead or Dreaming" in the United States.

This week, Into Eternity made the 40-hour drive to New Orleans to kick off their first ever U.S. tour, which will stop in 24 states over the next two months.

"I can't wait," says Roth. "I want to leave today. Just over the Internet, we've gotten e-mails from people in all of these states who like the album."

Roth expects the tour to be a bit more successful than the band's first U.S. date, the Milwaukee Metalfest this summer. Into Eternity drew a bad slot on that show, playing at the same time as thrash metal titans Exodus. Roth says there was no competition - even he wanted to see Exodus. Still there was a silver lining in the small crowd.

"There weren't a lot of people there," Roth says with a laugh. "We were playing next to Exodus, and I was so mad because Exodus was a band that I grew up on. But the people that were there, they dug it for sure."

Following the Valentine's Day opener in New Orleans, Into Eternity will criss-cross the country through March, then play dates across Canada on their way back to their hometown. There won't be a break after that. They're set to go back in the studio in April to record a new album, and possibly their first music video. The album should hit shelves in the summer, and then it's back on the road.

"As long as you're in the public eye, I think it's a good thing," Roth says. "You can only do so much over the Internet. We don't have videos and we're not on a ton of radio, so you've got to tour to build that fan base. We plan to tour as much as possible."
Posted by Fred Phillips at 4:41 PM