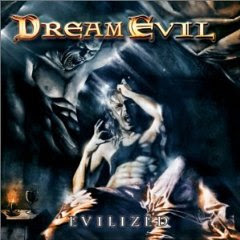 Dream Evil's debut "DragonSlayer" was a collection of solid, if a bit unremarkable, retro power metal. It was easy and fun to listen to, but it didn't really stick with me.

I expected more of the same from "Evilized," but from the cutting riffs of the opening track "Break the Chains," the album sucked me in. With knife-edge guitar riffs and a nostalgia for the golden days of metal, this album will capture the hearts of old school metal devotees.

For those who catch the reference in the band's name, it will come as no surprise that there's a heavy Dio influence on songs like "Bad Dreams," "Fear the Night" and "Invisible." (I have to confess when I saw the title "Invisible" I was hoping for a cover of the Dio classic. Alas, I was disappointed, but it's still a great song.) But there are also shades of Iron Maiden, Judas Priest, Queensryche, Savatage and plenty of other classic bands.

Fast, heavy and melodic are the hallmarks of Dream Evil's music and they do those things as well as anyone out there. If you're one of those people who wonders why they don't make metal like they used to, then you'd do well to check out "Evilized."

Get "Evilized."
Posted by Fred Phillips at 5:39 PM