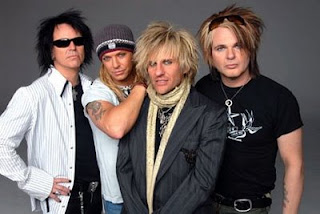 They may use a little less makeup and hairspray these days, but not much else has changed about Poison.

The band's recently-released ninth album, "Hollyweird," is full of the same glitzy, hard rocking, three-chord anthems to hedonism that brought Poison three multi-platinum albums and a string of Top 40 hits in the late 1980s and early '90s. Drummer Rikki Rockett says the band wouldn't have it any other way.

"We've definitely stuck to our guns," Rockett said. "Poison is Poison no matter what else is happening. I don't want to follow trends, because you can't keep up with them anyway."

Rockett said their unflinching commitment to making the music only Poison can make is what has allowed them to continue to tour arenas and amphitheaters long after many of their contemporaries from the '80s have fallen into obscurity.

Poison hit the road recently with three other bands from the 1980s - Cinderella, Faster Pussycat and Winger.

It's Poison's fourth similar package tour in as many years. Rockett said the formula is working.

"People seem to love it, because they're familiar with a lot of these artists and a lot of their songs," he said. "There are a lot of newer acts I'd like to have on the road, but the way they're sold - it's a hard-sell. A lot of new music is shoved down your throat. With this tour, everyone knows the bands; everyone knows the songs. It's laid-back and we have fun."

But don't call it a nostalgia tour.

"People who say that are really overlooking the obvious," Rockett said. "We have a current record; we're playing new songs and old songs. We're a band with a history. A rock band that's out there making current records is not a nostalgia act."

Rockett said part of the problem is the perception that you have to be young to have validity as a rock band. He disputes that. He said he thinks a band really needs to show some staying power first.

"I don't want to be young forever; I'm really over the whole idea that you have to be a young band to have any kind of validity," he said. "I'm sorry, but Linkin Park doesn't have validity yet. They're making good music, but until you've done it for a while, how can you know what it's really worth?"

And what about that other term that often gets thrown in the face of 1980s rockers? Rockett said the words "hair band" really don't bother him anymore.

"If we're going to categorize like that, then we'd have to say a lot of the current bands are goatee metal," he joked. "On one hand, it's unflattering, but on the other hand, people have been trying to categorize us for years. First we were metal, then glam, then glitter metal, now hair metal. Everyone is striving to categorize. It's really sad that we just can't have music for people to enjoy."

No matter what you call them, Rockett said there's one thing that Poison will always deliver - a solid stage show. Since their early days, Poison has been known for their over-the-top pyro and light spectacles, and this tour will be no exception.

"If someone's going to make the effort to come out to a show, they really deserve something more than just us playing on stage," Rockett said. "Bands that do that just aren't working hard enough for me."

So far, fans have responded well to what Rockett calls an "old school" approach to the stage show. Their previous package tours have been successful, and he expects this one to do well also.

But will Poison ever enjoy the same kind of success they had in the '80s again? Rockett is not sure he wants that.

"It's a different kind of success we have right now; it's not for the moment," he said. "I'm really happy with how things stand. We have a career; we have a loyal fan base. I think we can do this for a long time. We're not the flavor of the month."
Posted by Fred Phillips at 5:48 PM