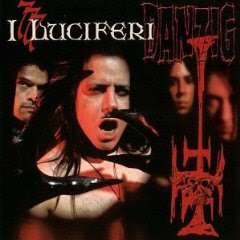 On Danzig's last two albums, the band experimented with mixed success with electronic sounds. But with this - their seventh full-length studio release - Glenn Danzig and Co. have come home.

"I Luciferi" is a welcome return to their roots - blues-based hard rock, classic heavy metal, punk and gothic.

Like Danzig's best work, "I Luciferi" is driven by big guitar riffs and haunted vocals - an odd blend of Elvis, Jim Morrison and Beelzebub. Gone are the synthesizers that disguised that distinctive voice and the industrial clanking of the last two albums. They've been replaced by raw, energetic rock 'n' roll.

The difference is evident from the beginning of the album. The pummeling guitar riff of "Black Mass" gets things going. It's easily the best Danzig riff in at least a decade.

In fact, the first three songs on the album may rank among the best Danzig has recorded. The second cut and first single, "Wicked Pussycat," has a down and dirty grind that would be right at home on the band's first two albums. The mewling guitar sounds are a nice touch, as well. The third tune, "God of Light," offers a nod to the current metal scene with a catchy percussive riff.

No matter what influences work their way into his songs, they're all undeniably Danzig. Listening to "Kiss the Skull," one is reminded of Danzig's early days with seminal hardcore punkers The Misfits; the title track and "The Coldest Sun" show leanings toward his days in the goth-metal band Samhain.

Of course, the album has the trademark Danzig ballads. But the term ballad is misleading; while these songs are softer, they're by no means commercial. Instead, they feature haunting melodies and dark lyrics.

The mystical-sounding ballad "Angel Blake" has a mocking tone, like a children's nursery rhyme gone bad. And "Dead Inside" tackles the subject of depression.

With this album, Danzig weaves a dark, dense tapestry of sound that will be more familiar to long-time listeners than the techno-industrial efforts of his recent works. It's nice to have him back.