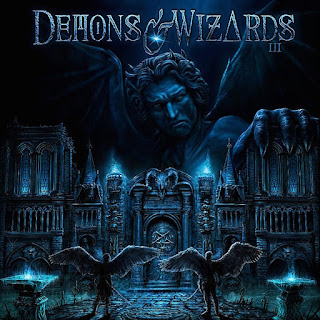 Fans have waited 15 years for the third album from Demons & Wizards, the side project of Blind Guardian vocalist Hansi Kursch and Iced Earth guitarist Jon Schaffer. Was it worth the wait? That probably depends on how much you like the music their respective bands have pumped out in recent years.

Album opener "Diabolic" sets a high bar for the rest of the record. It's a dark, classic D&W-sounding piece, with a chorus lyric and melody designed to bring to mind their 2000 self-titled debut, in particular the song "Heaven Denies." Kursch's voice retains its power, though the melodies he's singing sometimes leave much to be desired. There's an interesting hard rock influence that comes in, particularly on "Invincible" and the AC/DC- and WASP-inspired "Midas Disease." I think they should have explored that sound just a little more.

Much like the last several outings from Iced Earth and Blind Guardian, III has a few exceptional songs and a bunch that are just ho-hum. They're not necessarily bad, but they kind of follow the Jon Schaffer playbook when it comes to riffs and melodies, and even when songs start strong, they often wear out their welcome a little, as in the case of album closer "Children of Cain" and the Queen-tinged "Dark Side of Her Majesty."

In 2010, this album probably would have been a lot more exciting than it is in 2020. That said, there's still some strong material here, and more of it is good than not. It by no means compares to the band's first two records, but fans of those albums will most likely enjoy it, if not quite as much.

Posted by Fred Phillips at 2:29 PM