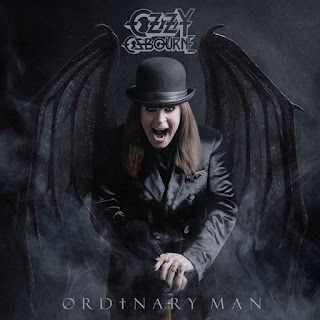 There has been talk of a new Ozzy record for a few years now, and it’s sparked hope that we’d get that one last really awesome album that would erase some of the lackluster releases of his later years and send him out on top.

Now we have it, and, man, this is tough.

The problem I have with Ordinary Man is that the songs are, I think, some of the best that Ozzy has recorded in years. But the album is extremely difficult to listen to, not because of the content, but because it sounds like utter crap. It’s like I’m listening to music through a busted speaker, especially in the heavier moments. I’m assuming that was the sound they were going for, but I don’t understand why.


Take third track “Goodbye,” for example. In the early going of the song, I’m thinking this is really good. The mix is not great, but it’s dark, it’s haunting, even producer Andrew Watt’s first solo is strong (and I’m not at all a fan of his work here). Then, about halfway through the song it breaks into a heavy gallop, and I’m done. It’s fuzzed out, breaking up, like they had the volume up way too high when recording. Was that intentional? Am I just too old to get it? Sorry, but I want my music to sound good.

I had hoped when we first heard “Under the Graveyard” a few months back that it was an early cut. Admittedly, the song has grown on me a little, but it has the exact same problem as “Goodbye.” It’s the kind of raw, emotional and introspective piece that I think Ozzy should be doing at this point in his career, but it sounds like hot garbage – like a first demo of what could become a fantastic swan song. I was hoping it would get some polish before the album was released. Instead, it’s still a distorted mess with a guitar solo that sounds more like a synth.

Which brings me to my second problem with the album. Ozzy has been known throughout his career for working with some of the best guitar players in the business. It’s one of the hallmarks of his career. Watt is not one of them.

I don’t think we necessarily needed Zakk Wylde back for this record. As much as I love Zakk, honestly, his work has become a bit stagnant. But maybe another young gun could bring a fresh sound. I still would have loved to see what Gus G could have done if given a chance to actually write for the Prince of (bleeping) Darkness.

While Watt’s sound is, I suppose, fresh for Ozzy, it’s awful. His tone, if it can be called that, is abysmal. Broken up, overly distorted, electronic and barely even sounding like a guitar – back to that aforementioned busted speaker.

For that reason, the strongest moments here are often the softest, like the title track duet with Elton John. First of all, it’s about time the two got together since Ozzy has always had a bit of an Elton fetish, going back to “Goodbye to Romance” on the Blizzard of Ozz record. Both singers show a lot of vulnerability on the track, and Slash delivers a very tasteful guitar solo. (Maybe he could have done all of the guitars on the album?)

Likewise, “Holy for Tonight,” where Ozzy once again picks up his Elton and Beatles influences, may be the strongest piece on the entire record. It’s certainly the best sounding. I even have to give Watt props for a solid Brian May-style solo that’s probably his strongest work here.

On the heavier side, “Eat Me” is a highlight track. Yes, it’s absolute single entendre, but it has a funky melody and a nice chorus hook and even Watt’s solo is solid. The dark and menacing “Today is the End” delivers pretty much exactly what I want from Ozzy. The appropriately spacy “Scary Little Green Men” with its punk-influenced chorus is a lot of fun, and it’s the one place where the messy mix almost works.

There are a few throw-away tracks on Ordinary Man. “Straight to Hell” with it’s cringy lyrics (“I’ll make you scream, I’ll make you defecate.”) was probably not the best way to open the record, and closer “It’s a Raid,” featuring Post Malone is pretty much a hot, unlistenable mess. But those are the exception rather than the rule.

Ozzy’s voice, of course, gets lots of help on this record, but that’s to be expected. How long has it been since we heard an honest, unaltered Ozzy vocal? I do like that we are occasionally allowed to hear just a little bit of his age and the wear show through the cracks, though, and it helps sell songs like “Under the Graveyard” and “Goodbye.”

In the end, I walk away from Ordinary Man frustrated and disappointed. The songs, for the most part, are on point, and this could have been that grand swan song for Ozzy. But it sounds terrible. I can’t count the number of times I started to enjoy it and then that buzzy, distorted production made me want to throw my headphones across the room. It’s a crying shame.

Posted by Fred Phillips at 1:28 PM