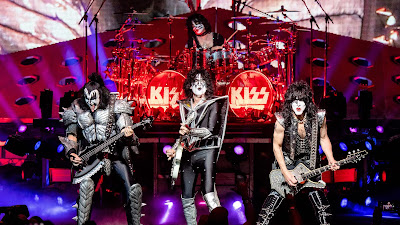 When tickets went on sale for the End of the Road Tour in Bossier City last fall, I was considering going. My son had never seen Kiss, and though I believe this is a retirement tour just about as much as I believe in any other “retirement” tour these days, I had to admit that Gene and Paul are getting up there and this might actually be the last time I got to see them.

Then I checked the prices and decided that I’d seen Kiss enough times over the years. I saw them sans-makeup in the 1980s, on the reunion tour in 1996 and on a previous “farewell” tour. And honestly, the last time I caught them with the current lineup, they kind of phoned it in, and I left disappointed.

Fast forward to the night before the show, and a stray thought struck me to check and see if there were tickets left. There were, and there was a discount code that took some decent seats down to about $40 (which, of course, works out to about $70 apiece after Ticketmaster gets through with you, but that’s another rant). How could I say no at that price?

The first odd thing about the show was that there was no opening band. Instead, there was a painter.

How the heck does that work?

I scoffed at the idea, but I have to admit that it was somewhat entertaining watching David Garibaldi energetically turn blank black canvases into paintings of Stevie Ray Vaughan, Elvis and, of course, Kiss over the course of about 20 minutes.


When he was done, it took about another half-hour to ready the stage for the main event, but finally, the opening drums of Led Zeppelin’s “Rock and Roll” kicked in, and everyone knew it was go time.

Minutes later, the arena exploded in pyro and flame as the curtain dropped to reveal Gene Simmons, Paul Stanley and Tommy Thayer descending to the stage from the rafters as they opened with “Detroit Rock City.” Once grounded, they tore through a couple of other classics in “Shout it Out Loud” and “Deuce.”

Though they did slip a few more recent songs into the set, like “Say Yeah” and “Psycho Circus” (if you count 20-ish years ago as recent, and for Kiss, I do), it was heavy on the classics. I wouldn’t have it any other way. It spanned all eras of the band and hit most of the songs that I’d want to hear and a surprise or two. The only real disappointment in song selection was the lack of anything from Revenge, a personal favorite. Of course, last time we saw them they substituted “Unholy” for my wife’s favorite, “God of Thunder” – and years later, I’m still hearing the complaints, so I guess, it’s just as well they didn’t play it. (And, yes, I did check recent set lists to make sure “God of Thunder” was there before I bought the tickets).

After a couple of rousing crowd sing-alongs in “I Love it Loud” and “Heaven’s on Fire,” we got to the first big trademark moment in a Kiss show when, at the end of “War Machine,” the flaming sword was brought on to the stage for Gene Simmons to breathe fire. That set off all of the expected campy, but beloved antics.

Eric Singer got his moment during “100,000 Years” as his drum kit rose up on a lift for his solo. Being a guitar guy, a drum solo is usually code for “bathroom break” for me, but Singer’s performance was oddly compelling. He managed to hook me early, and it’s one of only a few drum solos over the years that I remember honestly enjoying.

“Cold Gin” was interrupted by Tommy Thayer’s guitar solo, in which he fired shots from his flying V causing deafening explosions to reverberate from the rigging. That led straight to probably the most iconic Kiss moment: Simmons took center stage, abusing his battle axe bass as he sprayed blood from his mouth and then lifted off to perform “God of Thunder” from the top of the arena.

As is to be expected, there was a bit of a lull after that climactic moment in the show as the band performed “Psycho Circus” and “Let Me Go, Rock ‘n’ Roll.” But then things picked up again when Paul Stanley jumped on a zip line and soared just above the heads of the crowd to a star-shaped stage at the back of the arena where he performed “Love Gun” and “I Was Made for Lovin’ You” before zipping back to the stage for the main set closer “Black Diamond,” the song in which Singer proved himself to be the strongest vocalist on the stage.

After the long goodbyes that no one in their right mind believed were real, Singer again took the stage behind a piano to perform “Beth.” That led to another round of goodbyes that frankly was overkill for me. We all know you’re not leaving yet; just get on with it.

Eventually, they did, with a bit of a surprise in “Crazy, Crazy Nights.” The Crazy Nights album gets a lot of heat for its pop leanings, but I’ve always had a soft spot for it since it was the first Kiss album I actually owned. So, I was happy to hear it as the arena was lit up and Kiss-themed beach balls were dropped from the ceiling to be bounced around for a bit before fans started pulling them down and holding tightly to them as souvenirs.


Then it was time for the real finale, the only song that could close a Kiss show, “Rock and Roll All Nite.” That’s when the whole stage exploded and the audience with it. Simmons and Thayer took to lifts that carried them all around the front half of the arena, allowing them to get up close with fans on the first and second levels and in the middle of the crowd on the floor. For their part, fans sang along enthusiastically, and every bit of pyro that was left in the building went off at some point. It was all the excess that you’d expect and more, and I loved it.

When it was finally time for the actual goodbyes, I thought it was a bit funny that Paul Stanley told the crowd that they’d see us again. So much for that end of the road thing, huh?

There were a few gaffes during the night. At times, Stanley’s voice showed the wear and tear, and at other times, you could tell the band was getting some help from a backing track. There was also some poor research on the part of whomever was giving Paul his talking points, as he said they get to Baton Rouge and Shreveport, but not to Bossier City much. (For those who don’t know, Shreveport and Bossier are only separated by a river and the CenturyLink Center has been the premier music venue for both cities for about 20 years.)

But when things started blowing up, no one really cared about those minor issues. And plenty of things blew up. I realized pretty quickly into the show that those original ticket prices had to be high to cover the price of the pyro alone, and I often felt sorry for Eric Singer at the back of the stage absorbing the brunt of those flame gouts every time they went off. It was easily the most insane stage show from that perspective that I’ve ever seen from Kiss.

I had misgivings based on my last lackluster experience with the band, but in the end, I was glad that I went. My son got to see what all the hype was about and will have a story to tell about Kiss to his kids one day. And if indeed the Bossier City performance was a farewell, it was a much better one than I would have had if the most recent show I’d seen were my final experience. It was money well spent and memories well made.
Posted by Fred Phillips at 1:48 PM