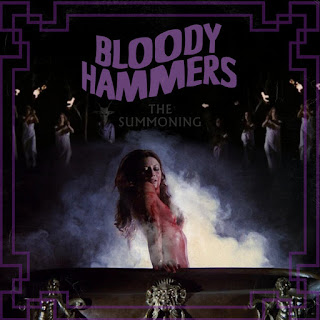 Hammers seem to be a theme in the music that I’m enjoying lately, but I really don’t have a problem with that.

The Summoning is the fifth record from Bloody Hammers, a horror-rock duo that hails, appropriately, from Transylvania County, North Carolina. Founder Anders Manga is the primary songwriter and handles the vocals, guitar and bass. The other permanent member of the band, Devallia, takes care of the keyboards, piano and organ, and they have a rotating cast of touring musicians.

I’ve always thought the band was interesting. I’d hear a song here or there and think, “that’s kind of cool,” but it didn’t hit me hard enough to send me looking for the rest of the record. The Summoning, however, hits all of the right notes for me.


I’d describe the album as an atmospheric experience, but not in the usual sense. Normally when I say that, I mean it would be something I put on to set a mood, but perhaps not something with standout songs. The Summoning would definitely set a mood, but it’s also chock full of really cool guitar riffs and nice hooks.

Bloody Hammers blend a lot of different styles well here. There’s the gothic electronic alternative of bands like Sisters of Mercy and some of the creepy atmosphere of Type O Negative, but there are also big, chunky Black Sabbath-style riffs, the occasional thrashy run and even a little taste of Misfits punk mixed in with a few other surprises.

There’s no doubt, however, that the voice of Manga drives the songs, and rightfully so. His vampiric vocals are oddly soothing, but also sinister, particularly in context of the subjects that he sings about. It creates a bit of an off-kilter situation for the listener that just adds to the mystique and atmosphere.

Through the 10 songs on the album there are some very interesting stylistic shifts, too. On one end, you have a song like second single “From Beyond the Grave,” which is a pretty upbeat and energetic tune. It opens with a heavy riff that’s a bit reminiscent of Helmet’s 1990s alternative classic “Unsung,” but then traipses into gothic territory with Devallia’s synths setting the mood. It’s an addictive foot-tapper that will stick with you.

On the other end is the dark and moody “Condemned, The Prisoner,” which features nods to Johnny Cash both musically and lyrically. This one strikes a more bleak and hopeless tone as it tells the tale of a man awaiting his execution. There’s a power-packed chorus and a great Sabbath-inspired guitar riff about halfway through, and Manga’s voice even takes on a bit of a Western twang here and there playing on the Cash theme. It’s probably the strongest song on the record, but the point is that both styles work really well for the Bloody Hammers.

They play up the horror camp awesomely on album opener “Let Sleeping Corpses Lie” and first single “Now the Screaming Starts” (both named for 1970s horror films). “Sleeping Corpses” has an odd, bouncing guitar riff that’s one of my favorites here and a fun, yet sinister chorus. “Screaming” is something like you might have gotten from a collaboration between Rob Zombie and Peter Steele of Type O Negative, moody but memorable and catchy.

While most of the songs here go for moodiness and atmosphere, there are a couple of heavier bangers. “Fire in the Dark” leans more on grinding guitars than many of the other songs, and “Tales that Witness Madness” and album closer “Unbreakable” approach thrash in places. On the gothic side, you have “Welcome to Darkness” – which, to my ear, really showcases that Sisters of Mercy influence that I talked about earlier.

The title track is another personal favorite. Plodding compared to some of the other songs on the album, Devallia’s keyboards set a mood somewhere between 1980s pop and horror movie soundtrack, and Manga’s vocal when he delivers the chorus lyric, “tonight the faithful have begun … the summoning” just really gets me. It would be a beautiful song for a low-budget ‘80s horror flick about witches, and I absolutely love it.

So, if you’re looking for a soundtrack for your Halloween party this year, The Summoning would be a great choice. If you’re looking for an album to crank up and bang your head while you’re driving down the highway, well, it’s great for that, too. Bloody Hammers strike the perfect mix of riffs, mood, melody and camp to drive a stake right through my metal heart.

Posted by Fred Phillips at 1:32 PM