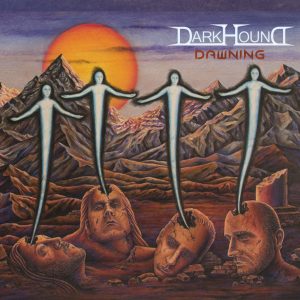 When I think of Nashville these days, my first thought is usually nausea-inducing, skinny-jean wearing, faux-country boys rapping about pickup trucks and dirt roads. But even if I listed the positives of Nashville music – and there still are a few – I highly doubt that a blend of thrash, progressive and early-‘90s hard rock would appear anywhere on that list. But here I sit, listening to Dark Hound’s latest album Dawning, and enjoying the hell out of it.

Listening to this record, I hear shades of some favorites: early Saigon Kick, Lillian Axe’s more progressive work, Testament, perhaps a little Dream Theater here and there. But Dark Hound blends it all together into a sound that’s completely their own and doesn’t really fit into any of the current trends or sub-genres in the metal world.

The album caught my attention right out of the gate with opener “The Ashes of Your Worth.” It’s no secret that I consider Saigon Kick an incredibly underrated band, and ET Brown’s vocal melody on this tune comes straight out of their playbook. I was immediately grooving to the song, but then he puts his own spin on the formula with some snarlier bits, while the rest of the band drives it home with a heavy feel.

My general rule of thumb when listening to promos is to give each track a cursory listen to see if I’m interested, then go back for a deeper dive. “The Ashes of Your Worth” got several full listens before I moved on to the rest of the album.

“Guilt Tripper” follows that with a straight thrash sound, but then the chorus drops into more melodic territory before progging out a little bit after the second chorus. Two songs in, and I already know I’ve got a contender.

“Carnival of Youth” delivers some huge riffing right off the top from guitarists Evan Hensley and Preston Walls; that’s topped with another absolutely infectious vocal from Brown. The guy is a master at delivering mesmerizing melodies that are hummable after one listen. The breakdown on the song reminds me a bit of classic Megadeth, with Brown snarling over a heavy riff, and then we’re back to that huge melody.

The guitars take center stage again as we open “The Answer,” with a nice dual-guitar lead giving way to a Mastodon-ish riff underlaid with bludgeoning drum work from Josh Brown. It’s not as instantly catchy as the first three tracks, but grows on you more and more with each listen.

I also have a soft spot for the album-closing “Here Lies the Truth,” which goes from a Metallica-influenced opening riff to a verse melody that reminds me of a mid-’90s Lillian Axe tune, maybe something off Psychoschizophrenia. The subject matter also hits home for me as a recovering former journalist, as it tackles the topic of the information-overloaded world today that allows people to put themselves in a bubble where everything they read fits their own personal world view. It’s a timely topic, and a damned good song.

The mix doesn’t always work. “Balancing Act,” in particular, fails to, well, balance out. There’s a nice grinding chorus in there, but the bash-you-over-the-head verses just don’t quite work for me. Those moments, however, are very few and far between. They’re also more than made up for by the Annihilator-influenced goodness of “Thrashgasm,” the angular prog flavor of “Stripped Away” or the chunky, driving pure metal of “Crisis of Hope.”

I walked away from Dawning wondering how I possibly missed Dark Hound’s first two records, an oversight that I intend to correct immediately. They blend the best elements of so many things that I love in metal into a very tasty treat – thrash intensity, big hard rock melodies and hooks, and just a little dash of weirdness.

For anyone who thinks of Nashville as the home of pop-country B.S., Dark Hound proves that there’s still some good music coming out of the town once you get off the main drag.