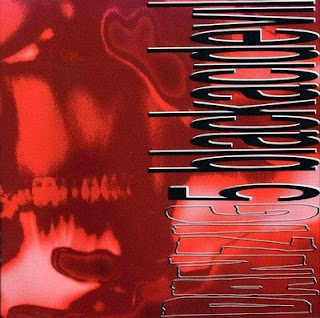 Most any band that’s been around for a while has at least one of those albums where fans listen and wonder, “what the heck were they thinking?” In this series, I’ll explore some of those moments where my favorite metal and hard rock bands went off the rails. Some of the records I may hate, some I may like, but all represent a fundamental shift in the band’s sound, at least for a moment. I’ll start with a record that’s one of the more dramatic changes of direction in my memory, Danzig’s blackacidevil …

After coming out of punk band the Misfits and the experimental horror outfit Samhain, Glenn Danzig established his own name and unique sound under the tutelage of Rick Rubin. For the better part of four albums, he delivered a dark, powerful, doomy brand of metal underpinned by blues rock. Even though he experimented a little bit on his fourth record under the Danzig moniker, nothing prepared fans for what was to come with his fifth outing in 1996.

For starters, the band of the first four records was scuttled. Bassist and long-time Danzig partner Eerie Von was out, severing a relationship that went back to the days of the Misfits. So were guitarist John Christ and drummer Chuck Biscuits. Now, Danzig was the only remaining member and in complete control to do something crazy – and he did.

Then there’s the title of the record, run together and all lower case. When it first arrived and single “Sacrifice” was getting a little bit of play, I sometimes heard it called “black acid evil.” Most fans agree that the name of the album is pronounced “black acid devil,” as Danzig sings it in the title track. But the name is only a small part of the divide this album would cause.

Gone were the heavy, Sabbath-influenced blues rock guitar bends and the familiar howling vocals. They were replaced by the mechanical elements of industrial rock and techno. Danzig’s powerful voice, most often, was masked by effects and distortion. For some fans, it was like nothing they’d ever heard before.

The new direction was announced immediately on opener “7th House,” which begins with a techno beat. Then Danzig’s voice comes in, sort of. It’s loaded down with heavy effects and sounds much more like Ministry’s Al Jourgensen. The opening lines are a bit goofy, too. Danzig has never shied away from sexual lyrics, but “Girl I’m gonna make you come, free your body with my gun” seems a little cheesy for him. Though it does clearly mark the change in direction, it’s not one of the better tracks on the album. And there are a few good ones.

Things pick up a bit with the title track. Though the techno beats are still there, the vocal melody is at least catchy. The first song that I really like, though, is third track “See All You Were.” It’s still heavily industrial, but slowed down a bit. It reminds me a bit of Nine Inch Nails and has a darkness that the first two tracks lacked.

"Sacrifice” was certainly chosen as the first single for a reason. It’s the first time on the record where we actually hear Danzig’s real voice. It’s still heavily electronic, with some distorted vocals on the chorus, but it’s not nearly as jarring as some of the other tracks. It’s also one of the least interesting pieces on the record, though.

The next couple of tracks, “Hint of Her Blood” and “Serpentia,” largely leave the vocal effects off, too, but while I kind of like the slinky chorus of “Serpentia,” neither are very memorable.

If I had to pick a favorite track on this record, it would be “Come to Silver.” The song was one of two written by Glenn Danzig for Johnny Cash. The Man in Black recorded the other, “13,” which Danzig would also put on his sixth album. “Come to Silver” is a creepy song that is enhanced by the industrial aspects, and it’s about the only track where I hear that blues-rock influence come through. Alice in Chains guitarist Jerry Cantrell also delivers some incredible guitar licks throughout the tune. A stripped-down acoustic version of the song was also released on The Lost Tracks of Danzig, and it’s tough for me to choose which one I like better.

One of the stranger choices Danzig makes is to cover Black Sabbath’s “Hand of Doom” … kinda. He lifts the memorable melody of the classic tune about drug abuse, buries it in some electronic noise and changes the lyrics to a less interesting sex-and-violence fantasy that’s meant to be disturbing, but seems kind of dumb to me. It leaves me wishing that he’d just covered the song straight and a little heavier.

He closes on a high note with “Ashes,” perhaps the most Danzig-like tune on the album. It’s a soft, dark piece that puts me in mind of songs like “Sistinas” and “Blood and Tears,” though the electronic/industrial sound is still there.

Before I sat down to write this, it had been years since I’d listened to anything from blackacidevil except “Come to Silver.” Revisiting it, I find that it’s more interesting than I remember, but I also walk away liking the same handful of songs that I liked when it was released 20 years ago – “See All You Were,” “Come to Silver” and “Ashes.” Though I don’t have the deep disappointment I had at the time, this album still feels like a failed experiment.

It’s interesting, but it’s not memorable nor as groundbreaking as Glenn Danzig seemed to think it was at the time. Bands like Ministry, NIN and Skinny Puppy had covered similar territory years before. Danzig would retain some of the electronic/industrial sound on subsequent albums, notably his sixth outing Satan’s Child, but he largely returned to that blackened doomy blues sound that he does best.

Still, blackacidevil proved to be a turning point in my opinion. Though he came close on 2010’s Deth Red Sabaoth, Danzig has never quite found that same black magic that he had on those first three albums.