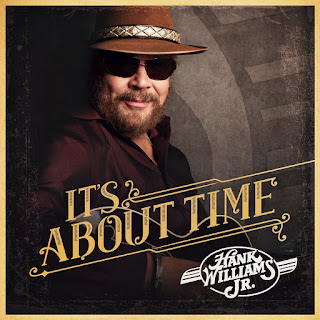 The title of Hank Williams Jr.’s latest album seems most appropriate. At least, it sums up what I’m thinking as I listen to what might be his best complete album in years: It’s About Time that Hank remembered he’s a musician and not a politician.

That’s not to say that there’s no political content on his Nash Icon label debut. His cover of Lynyrd Skynyrd’s “God and Guns,” for example, certainly qualifies. But the commentary comes from a far different place here than the soapbox pandering that he’s so often done in recent years. It’s closer to the sentiment on “A Country Boy Can Survive” than on, say, “Keep the Change” from his last record. The political content here is more a statement of personal belief than a forced attack on other ideologies, and you can respect that.

The Skynyrd tune is one of four cover songs scattered throughout the record with varying results. The album opens with a juke joint duet between Bocephus and Eric Church on Neil Young’s “Are You Ready for the Country?” It doesn’t top Waylon’s version of the song for me, but it gets It’s About Time off to a good start. “God and Guns” is a pretty straightforward cover of the latter-day Lynyrd Skynyrd tune, but it doesn’t flow quite as well as the original. Then Hank has fun with another fairly faithful version of Mel Tillis’ “Mental Revenge.”

He closes the covers out with a bluesy, in-your-face version of the gospel tune, “Wrapped Up, Tangled Up in Jesus (God’s Got It).” I thought the song might fall into that classic-country conundrum of a gospel song coming after 10 songs that often celebrated sin, but it turns out to be one of the strongest performances on the record, coming closer to a natural, rowdy, classic Hank Jr. tune than just about anything else here.

The rest of the record largely fits the traditional Hank Williams Jr. album formula, but that’s not really a complaint. “Club U.S.A.” is the rollicking patriotic tune – predictable, but not bad. There’s the requisite silliness on “Dress Like an Icon,” but it’s a fun kind of silliness, not the buffoonery he displayed on god-awful numbers like the country-rap “Farm Song” a few years back.

You’ve got the blue-collar anthem on “God Fearin’ Man,” which rocks with a heavy Waylon Jennings influence and delivers a memorable chorus. And, of course, Hank Jr. has never shied away from singing about himself. That song here is “Just Call Me Hank,” and it’s surprisingly enjoyable. Though it does have elements of his legendary ego, it’s a more reflective piece than I was expecting.

“Those Days are Gone” would have fit in on just about any of his classic albums – an old-school country swinger complete with steel guitar and piano. Naturally, it makes reference to his previous work and drops plenty of names in its longing for the classic country sound. It’s what Hank Williams Jr. does best. He covers similar territory on the title track, a solid country rocker where he sings “we’ve had enough of this weird pop country sound.” One could point out that Hank hasn’t always exactly been the champion of the classic country sound, but to be honest, when you’re listening to these two tunes, you can overlook that. They’re right in his wheelhouse.

For the most part, I blasted Hank Williams Jr.’s last album, Old School, New Rules, but It’s About Time delivers the record that I asked for in that review. Hank leaves the soapbox and the politics at home and gives us 11 tracks of rocking country that’s focused on the music. It still has all of his sometimes way over-the-top swagger, but it’s pointed in what I think is the right direction. It won’t compete with those classic late-1970s and early-1980s records, but it does seem that Bocephus has found his way again. All I can say is, it’s about time.