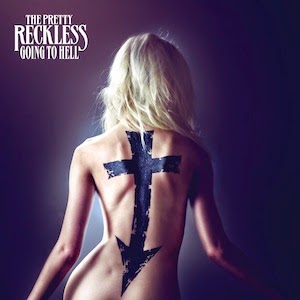 If I’d heard of The Pretty Reckless before I stumbled across the title track of their latest album, Going to Hell, I likely would have written them off as soon as I discovered that their singer was one Taylor Momsen, an actress from the TV show “Gossip Girls.”

Admittedly, I know nothing about the show, but I’m not inclined to carve out time for an actor trying to cash in on her TV fame with a bad record. I can be like that.

So, I’m glad that I heard “Going to Hell” before I knew that fact about The Pretty Reckless. The song got my attention right away with a big, catchy opening guitar riff and an energetic, punk-influenced verse. That riff comes right back on the chorus, and there’s something in the melody of that chorus that puts me in mind of Alice Cooper. It’s a ripping tune from start to finish, and sent me looking for more from the band.


Going to Hell features a mixed bag of hard rock, with the occasional feel of that cash-in I dreaded, but it’s far more good than bad.

The album begins with a trio of songs that are as good as probably anything in the more commercial arena of hard rock these days. Opener “Follow Me Down” lays down a sleazy, blues rock-influenced riff, and Momsen comes out of the gate roaring before dropping into more of a sultry vocal for the verse, which also plays up the blues rock aspect.

That leads into the previously discussed “Going to Hell,” which is far and away the strongest track here. Then comes “Heaven Knows” with a classic stomp-clap rhythm and a monstrous earworm hook, and we’re off to a great start.

The first crack comes on fourth track “House on a Hill.” It’s not a bad tune for what it is — the dark, moody ballad — but if you listen to rock radio for an hour, you’ll likely hear three or four songs that sound pretty much exactly like it.

There’s more than one instance of that here. “Blame Me” also has kind of a generic pop-rock feel. But “Sweet Things” gets us back on track, pounding the listener with a more metallic riff, and Momsen delivers another nice hooky melody. That drops away for a Manson-esque sort of creepy bit that features a male vocalist. They top it off with a Bowie-style glam moment, and the song really tells a story.

“Absolution” opens with a very nice acoustic guitar lick that I think is stronger than the heavier and louder portion of the tune. “Kill Me” finds Momsen spitting the lyrics in a frantic, semi-rap, but like some of the other tunes it’s a little hard to take seriously because of the posturing.

It does seem, at times, that Momsen is trying to make up for her status as an actress by trying to prove what a bad girl she is. Sex bubbles to the forefront probably a little more than it should throughout the record. There’s nothing wrong with that, but this band definitely has much more to hang its hat on than Momsen’s body.

“Burn” ends up being the big surprise of the record for me. When it began with just an acoustic guitar and Momsen’s vocals, I thought it was what I often refer to as the “sensitive artist” portion of a modern rock record. And, I guess, it is. But it’s a pretty enjoyable piece, too, and gives Momsen a chance to show that she does really have some chops.

So, while Going to Hell features its share of the more generic rock moments I kind of expected, it’s also loaded with energetic and intriguing moments. There are surprising influences to be found, ranging from 1980s glam rock, to shock rock, to industrial, to Bowie and even a bit of Pink Floyd here and there.

It just goes to prove, you can’t always judge a band by the occupation of its singer.

Posted by Fred Phillips at 8:04 AM