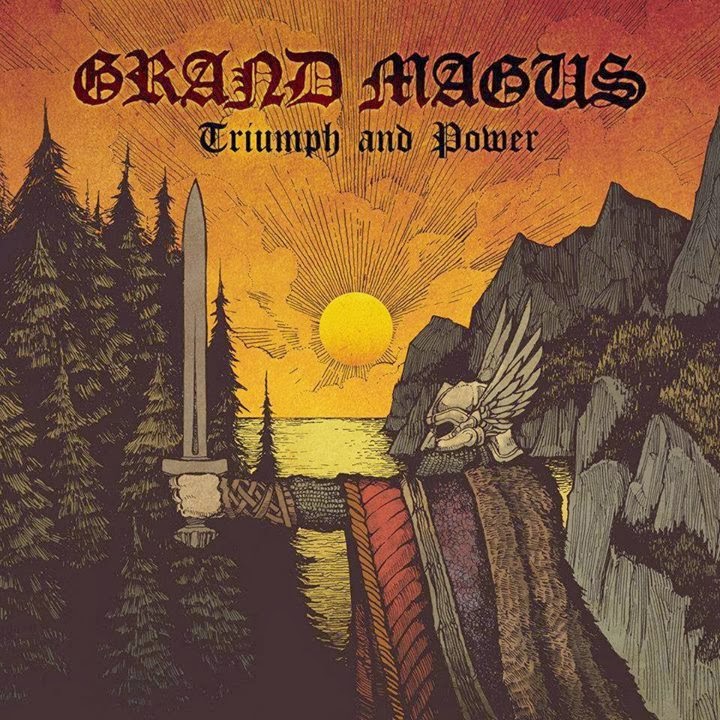 After several friends highly recommended Grand Magus’ latest record, I decided to give it a quick listen. I tried out the first two tracks on the record, “On Hooves of Gold” and “Steel Versus Steel,” and thought the retro metal sound wasn’t bad, but it didn’t immediately connect with me.

Three or four hours later, when the chorus of “Steel Versus Steel” was still running through my head, I decided that it was time to more fully explore Triumph and Power. The tune wouldn’t have been at all out of place on a classic Judas Priest record, and it kind of sets the tone for what Grand Magus delivers on this record.


Triumph and Power is a no-frills, hard-driving, straightforward classic heavy metal album. It’s old-fashioned and completely unapologetic about it. Janne Christoffersson cranks out some huge, galloping guitar licks and delivers his vocals in a clear, powerful voice, with nary a growl, scream or effect within earshot. Bassist Fox Skinner and drummer Ludwig Witt give the songs their drive, and the tunes are tight in that way that three-pieces often achieve better than larger bands.

Lyrically, there’s a lot of chest-thumping and sword-waving. The songs are filled with testosterone-fueled imagery of Vikings marching to battle. See the title track for a perfect example. The plodding, heavy march of the verse gives away to an infinitely hummable chorus hook that reminds me of some of Manowar’s best work in the fact that it’s kind of cheesy on the surface, but still irresistible.

The band takes a turn here and there. There’s an almost thrash feel to the guitar on “Dominator,” while Christoffersson delivers an old-school hard rock vocal that reminds me a bit of Jorn Lande. The instrumental “Arv” opens with the sound of battle drums and the squawk of crows, with a sinuous acoustic guitar piece laid over that evokes imagery of a battlefield in the sad wake of a slaughter. It’s a mood and feel that returns on the similar “Ymer” a few songs later, though that one builds into something a little more grand and majestic.

But for any slight — and they are very slight — detour they take, it’s hard to beat those straight-up, blazing traditional metal tunes. I can’t imagine that there’s a metal fan on the planet that could resist banging a head to the galloping chorus of “Fight” or the monstrous guitar riff of album closer “The Hammer Will Bite.”

Yes, Triumph and Power is a record that belongs firmly in the mid-1980s, and the imagery is, perhaps, by today’s standards a little outdated and bordering on cheesy. But damned if it doesn’t make me want to raise my sword in the air, bellow out a battle cry and charge into the fray hoping for the valkyries to carry me off to Valhalla.